A bunch of you sent me this feahsntrbr
CNN pieceÂ about the hidden dangers (every TV producer’s favorite kind!) of hand sanitizer. While the video is about teens deliberately drinking the stuff, the written story is about Purell-pickled nippers, and that’s what I’d like to discuss today. It starts with a story that’s almost too strange to be scary:

ATLANTA â€”Â Nhaijah Russellâ€™s parents had no idea what was wrong with their daughter when she was rushed to an emergency room from school.

The 6-year-old was slurring her words and was unable to walk.

She said that it tasted like strawberries, but she had no idea it contained enough alcohol to make her dangerously drunk.

Since 2010, poison control center hotlines across the United States have seen a nearly 400 percent increase in calls related to children younger than 12 ingesting hand sanitizer, according to new analysis by the Georgia Poison Center.

That is indeed a big increase, thoughÂ of course percents don’t really matter if we’re talking small numbers to begin with. But the number CNN quotes is actually a rather significant amount:

[Director of the control center Gaylord] Lopez said 3,266 hand sanitizer cases related to young children were reported to poison control centers in 2010. In 2014, the number increased to 16,117 cases.

Perhaps even more significant than the number, however, is the information CNN left out: Do the calls to poison control represent children actually harmed by sanitizer? Or just parents worried that their kids might be harmed? That’s a pretty big question, especially since the number could skyrocket after an article like this (leading to ANOTHER article like this). But CNN seems to treat a call as the equivalent of a medical emergency.

In any event, whether or not moppets are slurping up sanitizer, I’m glad that that the goop is finally getting a second look. I see it everywhere. People de-germ in a way that would have been considered obsessive-compulsive a generation ago. And with all the research into the Hygiene Hypothesis — the idea that we are too clean for our own good — I do hope sanitizers get washed out of our everyday culture.

It’s just too bad it may take a new scare Â — tanked tykes — to overtake the old one (germs everywhere/we’re gonna die!!!). – L 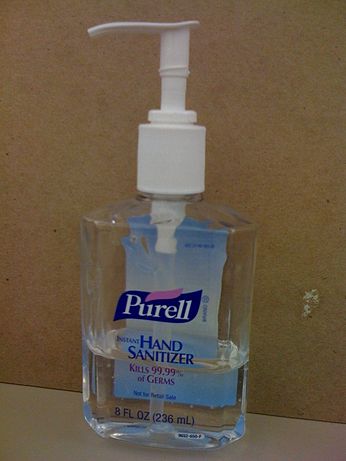 What It Takes, Security-Wise, To Visit a School
No Latchkey Children Under Age 10, British Columbia’s Supreme Court Rules