Readers rysyafeatf
— A New York kindergarten has cancelled its end of the year show, to devote more time to “preparing children for college and career with valuable lifelong skills.” These include becoming “strong readers, writers, co-workers and problem solvers.” Â Â Here is the letter, which I found transcribed on the blogÂ Ethics Alarms:

We hope this letter serves to help you better understand how the demands of the 21st century are changing schools, and, more specifically, to clarify, misperceptions about the Kindergarten show. It is most important to keep in mind is [sic] that this issue is not unique to Elwood. Although the movement toward more rigorous learning standards has been in the national news for more than a decade, the changing face of education is beginning to feel unsettling for some people. What and how we teach is changing to meet the demands of a changing world.

Â The reason for eliminating the Kindergarten show is simple. We are responsible for preparing children for college and career with valuable lifelong skills and know that we can best do that by having them become strong readers, writers, coworkers and problem solvers. Please do not fault us for making professional decisions that we know will never be able to please everyone. But know that we are making these decisions with the interests of all children in mind. 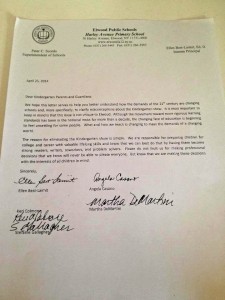 Is It Normal Not to Hire Boys as Babysitters?
“I Don’t Want a Man Sitting Next to My Kids on a Plane”