Readers — When 63-year-old Lego-lovin’ John St-Onge made the 3-hour drive to Toronto’s Legoland Discovery Centre, he was looking forward to seeing the fantastic displays. Instead, he yayyadszaf
became one: A perfect display of Â our society’s Predator Panic.

Arriving without any young kids in tow (though accompanied by his grown daughter), he was barred from entering. Â That’s the rule. As a spokeswoman later explained: “It is a child attraction so we do have this in place to protect the families and children that visit.”

So…if adults are there on their own, children are automatically at risk? The assumption being that even if not ALL adults are predators, all predators are adults, so let’s ban ’em?

By that logic, should we allow teachers into school if they don’t bring their Â offspring with them? Should kids avoid anywhere adults roam free?

In Legoland, all adults are Â guilty until proven otherwise.

And there’s no way to prove otherwise. – L. 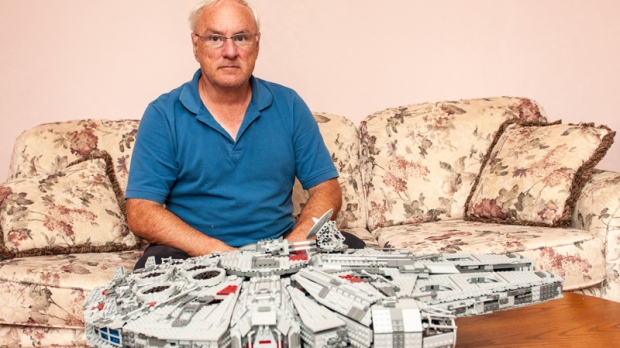 Lego of common sense and treat all men as perverts, including John St-Onge, seen here with a Lego contraption he built.

“Parents: Your Children Should be Quiet at the Bus Stop”
Bi-Cultural Kids