Just try kbakyibhyb
to figure out what the American Academy of Pediatrics and this spokeswoman are saying  in this Good Morning America interview about babies and their sleep. Apparently the AAP has reversed its stern directive which said that babies should be in the same room — but not the same bed — as their parents for six months, but preferably for the first year. This was presented as a must do as recently as October of 2016. Here it’s explained HealthyChildren.org:

Room share—keep baby’s sleep area in the same room where you sleep for the first 6 months or, ideally, for the first year. Place your baby’s crib, bassinet, portable crib, or play yard in your bedroom, close to your bed. The AAP recommends room sharing because it can decrease the risk of SIDS by as much as 50% and is much safer than bed sharing. In addition, room sharing will make it easier for you to feed, comfort, and watch your baby.

But now it seems to be saying that babies sleep better in a separate room after four months. And the expert here on the TV segment adds that, “Poor sleep leads to obesity,”  as if a fussy baby having a hard time getting to sleep is destined for a life of Weight Watchers frozen entrees. And once again there’s the exhortation to get rid of all blankets in the crib, which are lately treated like scorpions.

Finally — bizarrely — listen to the expert’s story of her own two kids: “One slept alone in their own room from  11 weeks of age, one just got out of bed at about 14, 15.”

So I think the real takeaway is this: There are a LOT of different ways to raise your kids. What works well for you may seem bizarre to someone (everyone!)  else.

By the way, this is also an argument for not putting parenting advice into law.

Putting babies to sleep on their backs does seem to have been proven to be safer, in terms of preventing Sudden Infant Death Syndrome. Of course, if the baby can’t sleep that way, you do what works. But as with most childrearing decisions, we can trust our guts.

In some cases, our weird, weird guts. 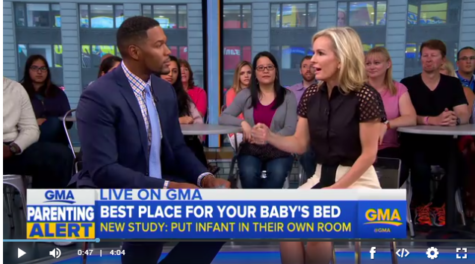 Per usual, we are getting new advice on how to raise our babies that contradicts other advice from a few months ago.

Maryland’s “Free-Range Mom” Danielle Meitiv Throws Her Hat into the Ring
“School’s Out for Summer” — What’s Wrong with This Ad?

45 Responses to Less Than A Year After “MUST DO” Baby Sleep Guidelines, The American Academy of Pediatrics Pulls a Switcheroo