Hi zzyrhebysf
Folks — This comes to us from a mom in Israel named Sorcha! Maybe your kids can have a weekend like hers! – L

.
Dear Free-Range Kids; I have 3 boys (10,7, 3) and since finding your blog a couple of years ago have beenÂ consciouslyÂ trying to follow the Free-Range philosophy. Admittedly, this is easier because we live in Israel which in general, (although this is changing) has a more independent outlook for children.
.
For the last week or so, my older sons, along with some of the other kids from our neighborhood, have been building a “machanay” (a fort or clubhouse) at the bottom of our street, which is a cul-de-sac and so has little traffic most of the time. They’ve had no adult input, and my oldest has been voted the leader, so he has to sort out the inevitable conflicts which arise.
.
On Sunday we had a “sharav” (hot wind) an lots of the machanay blew away and made a mess. But spontaneously, as soon as they got back from school, the boys were all out there cleaning up. Right now, they’re watching my 3-year-old down there while I’m supposedly Passover cleaning. But I really wanted to share with you what they can do when given the opportunity.
.
Thanks for the moral support that enabled me to let them go and do something so impressive instead of keeping them where I could see them. -Â Sorcha 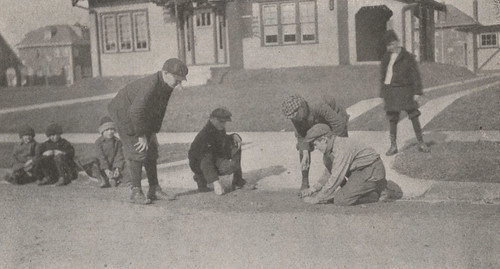 There’s just something great about kids playing on their own, outside.