Readers, I get about five stories a day that just flabbergast me. Here’s eaednfndyt
one. I’m not the only one slackjawed at the insanity of the concern afforded this “incident,” am I? I mean, just look at the headline!

Caledonia Police Department notified residents that a man suspiciously was asking two girls if they were selling Girl Scout cookies on Tuesday.

â€œAs the intentions of the male are not known, and may in fact be nothing more than what it seems on face value, his actions were suspicious enough for him to contact his police department. Since we were not able to speak with the driver, we do not know if his intentions were as innocent as they appear to be or a ruse for something different,â€ said the Caledonia Police Department in a release.

The father of the two girls reported the incident occurred on Tuesday around 4:45 PM in the 4400 block of West Johnson Ave.

Two girls, ages 7-years-old and 11-years-old, were standing at the end of a driveway.

A red Ford Ranger, extended cab with stickers in the back window stopped in the street and the driver, a dark haired white man asked the girls if they were selling Girl Scout Cookies.Â The girls said they were not and the subject left the scene.Â This incident was witnesses [sic] by the father of the two girls who reported the incident to us.

Here’s a rule of thumb: When something is called an “incident,” assume nothing happened at all. An incident is only an incident if it was NOT a crime, a melee, a disaster or an attack. In fact, I’d venture to say an incident is almost always a non-incident.

AND YET the police go on to say:

â€œWe are letting the public know what happened so this can be a teaching incident for the families of our community.”

Please remind your children how to handle contact with strangers when they are approached,â€ said Caledonia Police Department.

So remember: If your children encounter a man and nothing happens, Â please call the police. – L
. 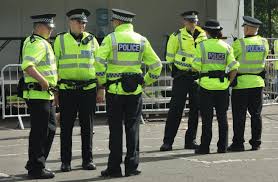 Your local police are there to serve. Alert them as soon as your child encounters a male.Â

Dear Prudence: I’m Scared That My 4-year-old Is 20 Ft Away from the Adult With Her!
Pope Francis to Parents: Thou Shalt Free-Range