Free country? Not if you think your kids are old enough to walk to school AND learn a lesson.

A Tennessee mom, Lisa Marie Palmer, learned this the hard way, after she made her kids walk to school when they missed the bus.

Wait a minute — she made her kids WALK? Outside? To school?Â How could they possibly do THAT, I’d like to know. It’s unheard of! Of course kayyfyrdby
this is a crime!

It “appeared as if she was driving ahead of the children and allowing them to walk and catch up to her vehicle and to proceed with that action until the children reached the school,” [ Marion County sheriff’s deputy Chris] Ladd states in the report.

Ladd estimated the girls already had walked about a mile and a half and still had about two more miles to go.

Surely no child has ever walked more than a few houses down the street.

And if, as the mom claims, she was “watching” them — ah, that’s hardly an excuse. Because Â the very WORST part was that Ladd could imagine something terrible happening to the kids — and the mom being a few crucial yards away!

“Temperatures were cold, and traffic was beginning to become heavy with citizens heading to work,” Ladd states. “Mrs. Palmer was in no position to reach her children safely in the event of an emergency.”

There you have it. The Sheriff’s Deputy has put into words the precise crime of our era: Daring to let a kid out of reach, ever. Officially, children are only safe when their mom (or proxy) is near enough to yank them away from the bad man. Because, what if???

So, dear readers, I hope you weren’t planning to do anything else with your lives besides stand next to your kids anytime they are not in school.Â Do this, and you will be punished!

At that point, Ladd cited Palmer for child neglect and began trying to arrange for the girls to get the rest of the way to school.

Because both those moves were so extremely necessary. The kids need help walking, the mom needs help learning how to parent. And the state rushed in to provide both! It cares so much about making this family do things the right way. And of course here is only ONE right way. (Hint: It’s not yours.) – L 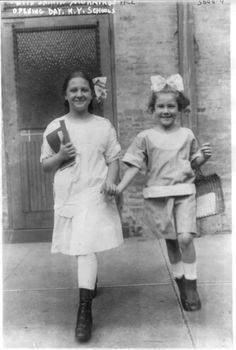 I hope someone arrested their mom! Where IS she? (And why did she let a stranger take their picture???)