An exchange between an 18-year-old and her mom has gone viral, reports brtzdzedtr
the website Shareably:

Kaelyn is 18, has graduated high school, and is going to be leaving for college shortly. Before she leaves, she decided to have a movie night with long-time friend Stevie.

Kaelynâ€™s mom is what you might call â€œprotectiveâ€ and has a policy of requesting selfies from Kaelyn at random times so she can confirm that Kaelyn is where she says she is.

Well, movie night turned into selfie night thanks to Kaelynâ€™s mom, and the teen posted the text exchange to Twitter. The tweet blew up as people all across the Internet realized maybe they all had the same mom.

If you check out the feed, you’ll see the first text from Kaelyn’s mom says: “Before you lie, where is your car?”

Then it shows Kaelyn proving over and over, via selfies, that she is where she says she is, that she’s with who she said she’s with, and that she did not photoshop the friend into a selfie.

Some commenters on the thread have said this mom reminds them of their own. But one pointed out that if the mom were a boyfriend acting that way, she’d be considered a stalker, or worse.

The ability to check in with our kids at almost any time and any age makes it seem kind of normal and even “good parenting” to do so. But the message the kid gets is the one Kaelyn got: “I think it’s safe to say my mom doesn’t trust me.”

It’s fine to ask our kids to check in and be responsible. It seems demoralizing, even destructive, to treat them like felons on parole, always tracked, never trusted. – L 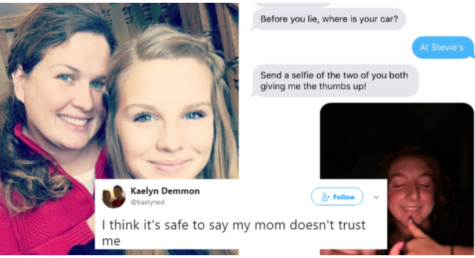 Thanks for your concern, mom.

HELP NEEDED: Mom of Girl, 11, Wants to Go Free-Range, Needs Some Neighbors to Do The Same!
Surge in Child Loneliness From 2007 to Present, Coinciding with Advent of iPhone

76 Responses to Mom Makes Daughter, 18, Send Endless Selfies Proving She is Where She Says She Is: Love or Abuse?