The New anrhtzzene
York Times article on Playborhood, the open-to-all playground that Silicon Valley entrepreneur Mike Lanza organized on his front and back lawns, continues to elicit a ton of comments and commentary. Here’s what Lanza wrote on his own Facebook page. And here’s a post by Tim Gill, the British visionary who blogs at Rethinking Childhood and has spent 20 years fighting for the right of kids to have some free, unsupervised time.

Gill points out that there is no such thing as zero risk. Yes, we can minimize risk, and we actually have — we currently live in the safest times in human history. But ZERO risk is a goal thatÂ he says (in more lovely British phrasing) drives us crazy:

It is linked with the parental norm that being a good parent means being a controlling parent, which is dominant in many high income countries. The truth is that both the mindset and the norm are highly problematic, and need challenging.Â The zero risk childhood is simply a fantasy.

[I]t ignores the fact that giving children a degree of freedom â€“ which may involve some challenging or frightening situations â€“ actually helps them learn how to keep themselves healthy and safe. Lanzaâ€™s perspective â€“ which I wholly support â€“ is that as they grow up, children gradually need to be allowed time and space when they try responsibility on for size and learn what it is like to be an independent person. This means that the adults have to figure out ways to step back and allow situations to unfold, even if there is a possibility their child might get hurt or upset.

Of course, stepping back is not easy. When, how far and for how long to step back depends on circumstances and specifics. What is more, different parents have different views on risk. As I have written before, it is rarelyÂ helpful for anyone to try to second-guess these sometimes difficult judgement calls, which are rarelyÂ cut-and-dried. But what can be questioned are the values and (yes) worldviews that shape them.

That questioning is what Free-Range Kids does, or tries to do: Question a society that, for instance, arrests parents who let their kids wait in the car for five minutes, or forbids third graders from walking out to the carpool line, or shames parents who don’t wait with their children at the bus stop where other kids and parents are waiting for the very same bus. That particular example comes to mind because last week I met a dad who stands with his 7-year-old at the bus stop four houses from their home every morning, even though he feels it’s completely unnecessary. But everyone else does it, so…

So the issue isn’t how much risk is precisely the right amount, and the issue is certainly not trying to create risk to test our kids. It’s simply that pursuing a zero-risk childhood often brings its own risks, like driving kids to school rather than letting them walk. (See this piece, “Walking to School is Less Dangerous than NOT Walking.”)

Gill is so right when he says it usually does no good to”second guess” other parents’ safety judgment calls. But it makes a ton of sense to assert our right to use our own judgment, rather than accepting Â the idea that no risk at all is allowed, ever — not even the minuscule risk of letting a 7-year-old wait at the bus stop with her friends, without dad. – L 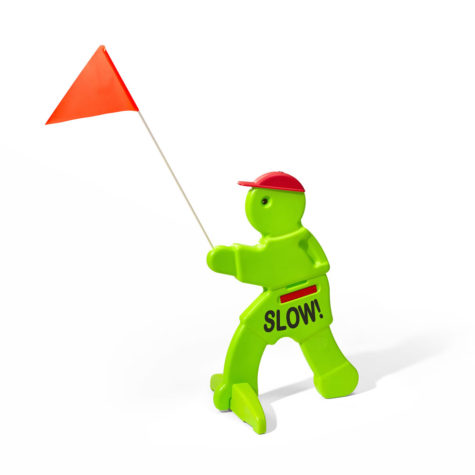 Slow! Kids playing! (And parents nearby, of course.)

19 Responses to More About Playborhood and Risk, From Tim Gill