Hi ndbnddnyen
Readers! This letter is a gauntlet thrown down by the student body president in Chappaqua, N.Y., a suburb so lovely it’s where the Clintons moved after the White House. (And apparently they have loved it!) I wish the letter had a few more details and of course, I do not know the administration’s side. But it sounds like the local high school, Greeley, is beset  by the same fears gripping so many schools these days: The fears of litigation, political incorrectness, possible student injury and just a fear of doing anything, when doing nothing is so much safer. The (much longer) letter appeared in NewCastleNow.org.- L.

OPEN LETTER TO THE GREELEY ADMINISTRATION: WHO TOOK MY GREELEY?

I was very disappointed to hear yesterday that the Greeley Games event* that I proposed is not going to happen. Quite frankly, I’m not at all surprised, as this seems to be par for the course these days. It has gotten to the point where every single member of the Student Council is disappointed with the way the administration is trying to dismantle the very things that had made Greeley great for so long.

…Why bother working on proposals and trying to innovate when we know the administration is going to say no? It’s funny that we are all so frustrated with our elected officials in Washington, yet the same thing is happening right here. Each time a new idea comes to the floor, we’re getting filibustered, then left to take the blame for not taking action.

It’s really sad to see… A group was [even] told they can’t sell hot chocolate in the morning for charity because it’s “too dangerous.”

…I don’t feel as if I’m doing even half the job I ran for as President and the reason for that is the administration. … For example, how do we know that the event I proposed would have an attendance problem if it’s never happened before? …

This school has gone from a place of which I was proud to be President to a place that I can’t wait to leave. If it is your long-term plan to oversee a community of grade-obsessed, one-dimensional, disinterested students then continue to do what you are doing. If you want a vibrant, engaged community of students who participate in their education more fully, then you need to reexamine how you interact with us. Less police state and PC paranoia and more positivity would help. Just today, I heard of two new issues that are all of a sudden problems in the eyes of the administration. I’ve been told that the beloved Greeley a capella groups have to meet with you because the fact that they rehearse off-campus is a problem. Why? Why do they have to change how they operate if they are successful as they are now? Isn’t this discouraging the independence that you encourage us to develop throughout high school? And now you want to change the traditional trip to Jones Beach for seniors? You have already dismantled quite a few senior traditions. Can you leave just one alone?

…To summarize, we’ve all had enough of the arbitrary decisions. The Theatre Company just put on a play about sex (and a very good one might I add) without being questioned, and yet a song for the a capella concert was questioned because it included the word “bullet” and referenced guns. Can you explain that inconsistency? I can’t.

I wish you an uneventful rest of the school year.

* The event was a field day/color war event for the whole school, to replace Seminar Day. It was going to be a surprise and hopefully bring the school together—but administrators took two weeks of considering it, just to say no.

Lenore Here: The comments on the site are pretty fascinating. I’m hoping the administration will write its own letter and make it public.  – L. 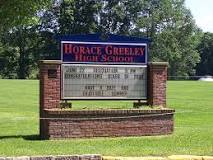 A Knife, a Walmart Birthday Cake and a Frenzy of Overreaction
Disney Bans Kids Under 14 from Entering Its Parks Alone

30 Responses to Most Scathing Student Body President Letter Ever