Dear btknenftir
Free-Range Kids:Â I am a professional woman who became a stay at home mother to a 10-year-old boy. I would describe him as very bright, highly energetic and reasonable. Here is my dilemma: We live in a city of about 50,000 in North NJ.Â  He has recently made it very clear that he wants to walk home from school by himself across a number of streets (about 1+ mile).

It has now started to impact his mood and I am worried. I want to give him independence and see him succeed.Â  Having done it myself (in Brooklyn) when I was his age, I know how exciting it can be to have that adventure, but I am admittedly very anxious and not sure how to take that first step of feeling comfortable enough to let him try. Â I honestly need a guide.Â  I just bought your book and hope to learn what youÂ  have so obviously perfected with your own child.Â  While I am waiting for it to arrive, what would you say isÂ  the most important thing to think about [other than statistics for non-death are on my side 🙂 ]Â  as I seek to simultaneously let him grow up and let go.

Thanks for any advice,Â D.

Dear D. –Â It is cool that you are considering both his desires/readiness AND the real stats about safety. Our job as parents is to try to prepare kids for the world (as opposed to trying to childproof the world), so I’m sure you know you have to teach him how to cross the street safely (no texting while on the street!), and not to get into a car with anyone, and the basics like that.

Then I’d do the walk with him once or twice to make sure he knows the route and there’s nothing egregious along the way, like train tracks with a malfunctioning warning light. And then, one nice afternoon, let him do it.

At least, that’s what I’d suggest. Because it will be SO COOL when he comes home. That’s just about the only thing I’ve seen break any parent’s fear/terror/worry — seeing their kid happy and confident after doing something on their own. Then suddenly what was so scary becomes normal.

Better still, your kid sees something really crucial: That you believe in him. That’s the wind beneath ALL our wings — knowing that someone we love thinks we are ready to take on some independence.

I actually have started a biz where I come to people’s homes to help them as they “let go” — freerangehousecalls.com. But it’s costs a fair bit and you really don’t need me. You can do it on your own. Anyone can. The business is just for folks who’d like some hand-holding. (Of the adult — not the kid!)

Just remember two things: 1 – Risk is inherent in ALL life. No activity is completely risk-free, whether it’sÂ being driven somewhere, walking somewhere, or even going down the steps to the basement. Trying to eliminate all risk is impossible.

2 – Until this modern era of 24-hour news, no one thought walking to school was a horribly dangerous undertaking. Most kids in the rest of the world still do begin at age 7. And still in much of the world a 10-year-old child would be tasked with getting water from the well, shepherding the family’s flock, taking care of three or four younger siblings, walking 5 miles to school, defending the family against intruders…all sorts of stuff. So try to keep some perspective. And let me know how it goes!!!

Good luck to you both! –Â Lenore (who, alas, has not “perfected” anything. But that’s ok. Kids don’t need perfection!) 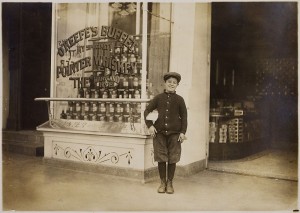 A 10-year-old delivery boy from another era.