This comment came in the other day and deserves a closer look. It comes from “Scout Mom,” the mother of two 9-year-olds. And she later found out that at meal time, it was not that each girl had to drink a specific amount, it’s that each table had to collectively drink another two bottles of water.

Completely dytriykksf
off topic vent here.Â  Well, I guess it’s on the topic of over “protecting” kids.

My 9yo got sent home from sleep-away camp this week.Â  Why?Â  Because of water obsession on the part of the staff / volunteers.

It was hot out, so they demanded that the kids drink 8oz of water per hour, plus 2 water bottles full at each meal.Â  They demanded it so forcefully that my kid was afraid of the consequences should she fail to comply.

She drank and drank until she could drink no more.Â  With a queasy stomach, she said she didn’t feel well.Â  They decided she was dehydrated and insisted that she drink more.Â  This happened every time she reported that she still didn’t feel well.Â  They called me twice about this Tuesday afternoon.Â  I suggested they just let her body work things out and check back with me the next day.Â  They didn’t like this but backed off.

Come evening and I got another call.Â  The cabin chaperone had dragged my kid back to the nurse’s office because she had wrapped herself in her sleeping bag to avoid being eaten by bugs.Â  Cabin lady insisted she was too hot to be wrapped in a sleeping bag.Â  Kid said she was not hot.Â  They also said she did not eat dinner because her tummy was still upset.Â  They were still demanding that she drink water continuously.

I asked them to let her sleep and call me the next day.Â  Cabin lady was floored, saying that if this were her kid, she would be worried about her health and come get her.Â  They also said they were afraid of needing to take my kid to the hospital for dehydration overnight.Â  But they backed off and let her stay the night.

8:30 next morning my kid’s stomach was still upset and she was still being made to drink water, so she could not eat much breakfast.Â  At that point they said she was “shutting down” and I needed to come immediately and take my kid home.Â  (Actually they said I should take both of my kids home, but I pushed back, since there were no reports of any problems with my other kid.Â  I guess they thought they’d punish both kids for having such a neglectful mother?)

I took 4 hours off work to go get my kid.Â  I had to wait for her to return from canoeing (with water in hand!), so apparently she had not in fact “shut down” as they told me.Â  As we drove away, she said her stomach felt almost normal, and we got some food and she ate it just fine.Â  She did say she was glad to leave, because all the attention and obsession over her body heat was freaking her out.Â  But I was not pleased that she missed half a week of activities over someone’s insanity.Â  Drinking too much water is dangerous too, but I guess nobody ever told these people that.

I asked my kid how the other kids were handling the over-watering problem.Â  She said they were spilling the water out when the adults weren’t looking.Â  My kid was afraid to do that lest she get caught and kicked out.Â  :/

This reminds me of a magazine’s hydration tips I once reprinted here:

1 â€“ Your child should drink 16 ounces of water two hours before a practice or game.

2- Then he should drink another 8 ounces for every 15 minutes heâ€™s participating â€” even during cooler weather.

3 â€“ It cane be hard to keep the fluid inake up during games, so at halftime your child should drink three full cups of water.

4 â€“ Offer three cups post-game to make up for intake missed during the game.

I get that dehydration is a possibility. But I also think we’ve forgotten that we have a regulating system that works better than any counselor or set of rules. It’s called “thirst.” Especially if water is readily available — and it sure sounds like at the camp it is! — there’s no reason to force kids to guzzle. – L 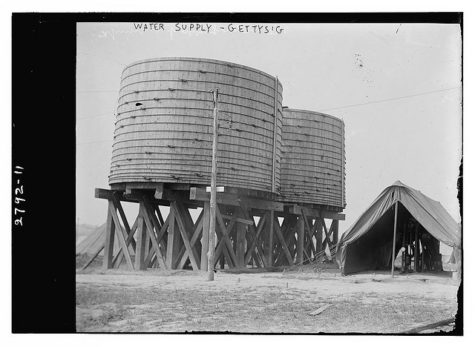 Kids, you only have to drain one of these after the hike.

How to Become a Pokemon-Go Fearmonger
Boy, 3, Sneaks Out and Wanders onto 6-Lane Highway: Is Mom Guilty of Neglect?