This carpool lane poster is getting a lot of Facebook cheers for teaching parents a lesson: 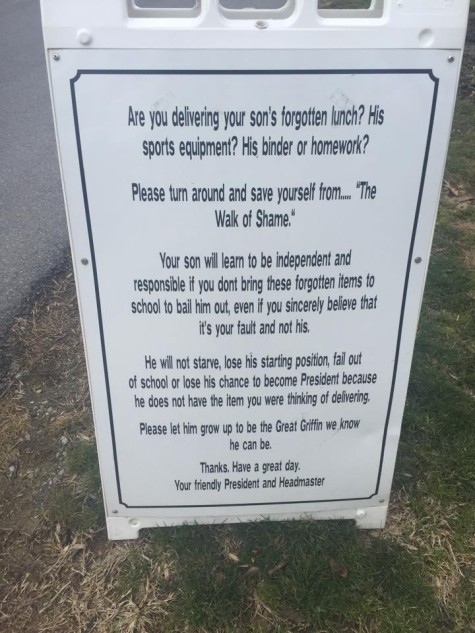 zhkyhsskfb
The poster of parental shame.

“Are you delivering your son’s forgotten lunch” the poster begins. “His sports equipment? His binder or homework? Please turn around and save yourself from…’The Walk of Shame.'”After all, the poster points out, your kid will not starve or lose his starting position or fail to become President just because of this small screw up.

All true.Â So why am I not chorusing in with my kudos?

Because while I agree that kids can learn from their mistakes, I also think that if once in a while mom brings Â them their forgotten lunch, that is ALSO not going to ruin them for life.

Obviously, kids do not need rescuing all the time — they can roll with some punches and (slowly, for some of our kids) learn to be more responsible. But there’s something about this poster that seems certain that there is one right way to raise a kid and parents doing it wrong are pathetic and crippling. My true belief –in fact, the title of a chapter in my book — is: “Relax! Not every little thing you do has THAT much impact on your child’s development.” And that includes delivering the forgotten tuna sandwich from time to time.

I guess it boils down to the idea that once again parents are being told that their behavior must be 99.99% “right” and thought-out, or their kids will suffer. Free-Range believes that kids are hardier than this. Let’s cut both generations some slack. – L

Danny and the Dinosaur and the Personal Injury Lawyer
Screaming and Laughing: Something You Still Hear?