Mom’s too busy to go outside with you, kid? Then clearly the only option is a $159.95 indoor play system. Because you couldn’t possibly go outside UNSUPERVISED and play with FRIENDS, or even even ENTERTAIN YOURSELF, right? Mom must be right there! Always! And so we present:

.
As ykytbhhhta
commenter Judy C. wrote in an email, alerting us to this gizmo (which DOES look fun — it’s just the idea that kids can’t go outside unsupervised that irks me):

As we start 2016 and make resolutions to be more active, I laughed out loud at this infomercial that my children watched on the Disney Channel:

Don’t get me wrong, I LOVE active kids! Just not climbing my walls inches away from me under this assumption that I have to entertain them every fun-filled moment of the day. Play doesn’t have to be expensive playgrounds carved out of individual backyards or shipped in 3 monthly payments. It’s a branch from a tree that’s begging to be climbed.

Of course, parental supervision required with the Gorilla Gym. Because even indoors, Mom must watch her child swing dangerously close to stacked dinner plates while cooking dinner on the hot stove.

This year, let us resolve to be ever on the lookout for the insidious message that an unsupervised child is automatically in danger. This is NOT TRUE and yet it is often presented as simple common sense. Here at Free-Range Kids we believe in CHILDREN, FREE TIME, and the kind of “pointless” FUN that leads to ideas, joy, wackiness, curiosity, problem-solving, self-reliance and genius.

Because genius is not something you buy. It is something visited upon kids when they expand to fill the space of childhood. – L. 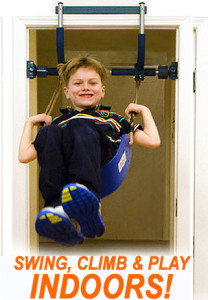 Because the outdoors is no place for kids!

The 10 Worst Free-Range Kids Stories of 2015 (and the 5 best!)
Imperfect Parenting is NORMAL, not NEGLIGENT! Another Kids in Car Saga

87 Responses to Of Course Kids Can’t Play Outside Unsupervised!