What is so important to show our schools? This USA hdhtbabraf
Today article that states, unequivocally, our schools are NOT GETTING LESS SAFE and so they don’t need new security measures (boldface mine):

It’d be easy to conclude that school has never been a more dangerous place, but for the USA’s 55 million K-12 students and 3.7 million teachers, statistics tell another story: Despite two decades of high-profile shootings, school increasingly has become a safer place.

…”I think (the concern) has to do with the psychological impact of some of these incidents,” says David Esquith, director of the U.S. Department of Education’s Office of Safe and Healthy Students, which oversees school security. “(The shootings) are so upsetting and traumatic, it reinforces a perception that schools are experiencing a spike in violence and victimization, when in fact they’re not.”

By nearly every measure, safety has improved and violence has dropped for students and teachers, according to recent findings issued jointly by the Justice Department and Education Department.

That’s it. I still wonder why having people sign in and show I.D. is considered such a great deterrent. (Wouldn’t anyone bent on real destruction get a fake I.D.? The sign-in always seems like a pointless bottleneck.) But the article does make a case for lockdown drills, so perhaps those make sense, even though their widespread adoption seems to have led (from what readers tell me) to a lot of unnecessary, even ridiculous lockdowns.

But at least the article and the experts are arguing against more expensive and/or elaborate measures. So consider this just some good news to bandy about. Go bandy! – L. 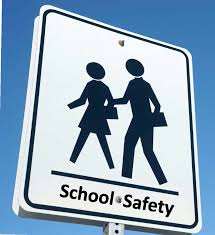 Watch out for silhouettes!

48 Responses to Parents: Please Show This to Your Principals and PTAs