Today’s zhznyryrnb
post comes to us from Reilly Capps,Â a writer in Denver finishing a book about couch surfing, which, he notes, “involves lots of trusting complete strangers.” Trust is not this school’s forte. — L.

Dear Free-Range Kids: I’m not a parent, only an uncle, but today a question presented itself at my niece’s new school:

When did picking up a kid from school turn into such a grueling, hyper-orchestrated ordeal? When did fear of accident or abduction necessitate so many onerous rules?

At my niece’s school, the parents are required to stay in their cars, with a number on the windshield, which a volunteer messages inside to let the teacher know that a parent is here, and that it is “safe” to “release” the child from school.

Then the children are sent out one at a time, and a volunteer checks that every child goes into the car with the appropriate number. Meaning 600 parents are stuck in idling cars in a single-file line, slowly inching forward, picking up 600 kids, one at a time (virtually nobody walks). Meaning the kids don’t hang out casually with each other after school, making new friends. Meaning each parent spends thirty minutes in a car, doing nothing, admonished if they attempt to get out and stretch. Meaning I was stuck with a toddler in the back seat screaming for juice or snacks — which of course I forgot — for half an hour. Meaning that parents, too, never mingle, and instead are just treated like anonymous chauffeurs, or eyed suspiciously as frothing kidnappers or vehicular maniacs bent on running down hordes of children.

(The rest of this email is a bit of venting and a little hyperbole, Lenore, but most of it is true.)

Does not this system cause other caregivers besides me to get into tense verbal tussles with administrators? Don’t we all screw up the protocol at some point — drop-offs drive EAST and pick-ups drive WEST? And don’t a bunch of us, flummoxed, with a screaming toddler melting down, decide to get out of our cars — firmly against the rules — and just walk to the school? And donâ€™t all of our heartbeats jump to 205 after the school secretary, clearly wary of our intentions, asks to see a drivers license, then methodically notes the number, then calls the childâ€™s mother at work to see if we are â€œon the list,â€ then does a full criminal background check and cavity search on us, certain that we are ruthless abductors on a kidnapping spree — and not simply incompetent uncles? (I mean, okay: the sweat-drenched brow, the wrinkled plaid shirt, the two-day stubble, the hungry toddler kicking in the arms does suggest â€œweekend dadâ€ or â€œpartial custody.” But does it really suggest “kidnapper”? ) And doesn’t this system make us all feel like criminals? Instead of like members of a school community?

And when the child is finally â€œreleasedâ€ to us, donâ€™t we all bicker immaturely with the school secretary, saying, â€œWhen did this happen? Isnâ€™t this all a little much, for simply picking up a child from a school? Are you sure you got enough from me? Don’t you want to do a polygraph? Some DNA? Before you â€˜releaseâ€™ my niece to me, can you cut off her ankle bracelet?â€ And then, heart racing and sweating even more, aren’t we all politely asked to leave the building? 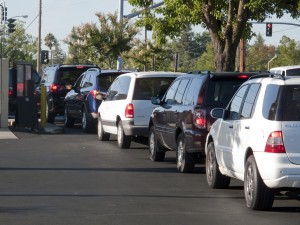 Suspended for a Keychain
The Federal Government’s “Operation Predator” App

143 Responses to “Pick-Up” Insanity at an Ordinary Suburban School