Readers hktdfrerzr
— A school in Hayward, Ca is offering a “toy gun buyback” to its students, modeled on the buybacks of real guns at real police stations. While I don’t have a big opinion about the idea — on the one hand, sometimes people mistake toy guns for real ones, which is tragic; on the other hand, laws based on one-in-a-million odds are usually over-reaching  — I am appalled by the reasoning of the principal:

“Playing with toys guns, saying ‘I’m going to shoot you,’ desensitizes them, so as they get older, it’s easier for them to use a real gun.”

Talk about absolute blather. Is there any proof of this whatsoever? How about the fact that millions upon millions of kids have played with toy guns  for generations without growing up desensisitized to what a REAL GUN is? By the principal’s logic, my husband should be a heartless murderer — he played with toy revolvers as a kid, as did his brother. And yet they both seem very aware of the difference between a toy gun and a Colt 45 (unless that’s the beer. Either way, they also know the difference between BEER and guns. And they don’t even mix them!)

The principal’s statement irks me because he’s making up a reason to be yet more terrified about our kids: How endangered they are now, how dangerous they’ll become.  Can’t win. Everything is just danger on a stick.

Best comment so far: “Does a Pop Tart shaped like a gun count?” Considering how afraid we are of everything having to do with kids (even them MENTIONING the word “gun”), I should hope so.

And before we get into a gun control debate — which I hope, hope, hope we don’t — please remember the point of this post: The thought train of the principal:  If a child plays with a gun he will grow up cavalier about (or worse, enamored of) real firepower. THAT’S what interests me. Not the ol’ gun debate. – L 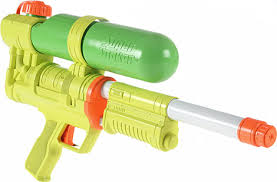 Will playing with this turn kids into thugs?

Oh No! A Hostel Near a Day Care Center???
A Shift in the Lunchroom at Work (to Free-Range)