Readers: ztnsthkzin
This seems like a cause worth supporting! It comes to us from a reader in Kentucky. – L.

Â  Â  Â  Â  There’s a wonderful playground at Jacobson Park in Lexington, Kentucky.Â  It’s a “creative playground,” so named because (obviously) it encourages children to be creative in their play.Â  Sure, there are swing sets and monkey bars.Â  But there are also wooden towers with twisty stairs and little wooden crawlways under them, ramps, sliding poles, bridges, and a wooden pirate ship. Â The kids are not always viewable. Our children can play for hours on a playground like this, mostly unsupervised, making up all sorts of games with the other children (who come to it from all over the city).Â  This playground is 20 Â years old now, and is in danger of being demolished.

Â  Â  Â  Â  It would be easy to frame this as a fight against evil city planners in bulldozers, but that wouldn’t be true in the slightest.Â  Our group of concerned citizens has met with the parks and recreation department, and they have been terrific.Â  They’re right that the playground needs work — although it has been well maintained, it’s a wooden structure nearing the end of its natural lifespan.Â  The parks and recreation planners are very open to hearing what we as a community want, but they’re pretty sure they know that safety is the absolute top priority for parents.Â  After all, wooden playgrounds can have splinters, sharp edges, and places where children can fall!

Â  Â  Â  Â  What we’re really fighting against here is the mentality that safety trumps all else, no matter how small the actual danger is.Â  We understand that the city has to make certain changes because some laws have changed over the last twenty years.Â  However, we are standing up to say that we do not think the current playground is too dangerous, and we don’t want a new design for this particular playground.

Â  Â  Â  Â  We love the Jacobson playground.Â  We think the city has some excellent ideas for new playgrounds, and there are lots of parks in Lexington that could benefit from these designs, but we want this playground to remain as it is.Â  We understand that the playground needs work, and we would like for the current playground to be refurbished or rebuilt with the current design intact.Â  If you agree, please support this effort by signing the petition atÂ https://www.change.org/petitions/lfucg-save-the-jacobson-park-playgroundÂ and by attending the meeting at 6:00pm August 14, Southland Christian Church, 2349 Richmond Road, Lexington, KY.Â  Thank you! 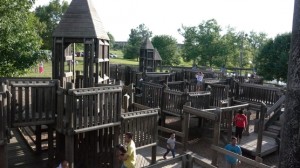 24 Responses to Plea for an Old-Fashioned Kentucky Playground