Readers ibhzadziik
— Once again we have evidence that our world has gone nuts. Does this “incident” seem to warrant police intervention to you? Doesn’t it sound like COMPLETELY NORMAL LIFE?

Police Report: Young girl left alone on Plaza
Posted on October 17, 2013 by Sun News
Observant Plaza-goers grew concerned on Friday afternoon, October 4, when it became clear that a seven-year-old girl had been left at the playground without supervision. The youngster was playing happily with other kids and was not scared, police. In fact, she told them that her foster mom usually sits in a parked car and watches her play. After about 20 minutes, and with the mother nowhere to be found – she went home to put the groceries away, the girl said – police took the girl to the station house. The foster mother, 55, of El Verano, arrived about 50 minutes later. She told police she had left the girl alone for a few minutes to put ice cream in the home freezer before it melted, and had returned to her parked-car vantage point. She told officers that she began looking for the girl when it started to get dark, and learned of the girl’s whereabouts from parents at the playground. The girl was released back to the foster mother, who promised “it won’t happen again.” The report will go to Child Protective Services. 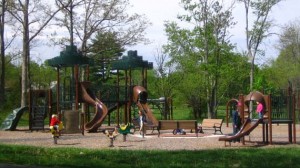