Readers knhizeyabd
— This is a troubling, fascinating look at the big childhood issue politicians are parsing now: The importance of early childhood education and what it should consist of. The Washington Post’s deep-thinking Valerie Strauss presents the work of Alfie Kohn who worries (as do I, and probably you) that “education” will be interpreted as something you can test and measure, rather than making sure kids get deeply engaged in something (e.g., “How can I make a skyscraper from rocks?”).  It’s engaged kids who are actually learning, even though it is the drilled kids who LOOK like they’re getting  a “rigorous” education:

The Trouble with Calls for Universal Pre-K, By Alfie Kohn

Universal pre-kindergarten education finally seems to be gathering momentum. President Obama highlighted the issue in his 2013 State of the Union address and then mentioned it again in this year’s. Numerous states and cities are launching or expanding early-education initiatives….

But here’s the catch: Very few people are talking about the kind of education that would be offered — other than declaring it should be “high quality.” And that phrase is often interpreted to mean “high intensity”: an accelerated version of skills-based teaching that most early-childhood experts regard as terrible. Poor children, as usual, tend to get the worst of this.

It doesn’t bode well that many supporters of universal pre-K seem to be more concerned about economic imperatives than about what’s good for kids. In his speech last year, for example, the president introduced the topic by emphasizing the need to “start at the earliest possible age” to “equip our citizens with the skills and training” they’ll need in the workplace.[1] The New York Times, meanwhile, editorialized recently about how we must “tightly integrate the [pre-K] program with kindergarten through third grade so that 4-year-olds do not lose their momentum. It will have to prepare children well for the rigorous Common Core learning standards that promise to bring their math, science and literacy skills up to international norms.”[2]

… That doesn’t leave much time for play…. Children are treated as passive receptacles of knowledge, with few opportunities to investigate topics and pose questions that they find intriguing. In place of discovery and exploration, tots are trained to sit still and listen, to memorize lists of letters, numbers, and colors.

This dreary version of early-childhood education isn’t just disrespectful of children; decades of research show it simply doesn’t work well — and may even be damaging.[5]

Lenore here: Free-Range Kids does not presume to know exactly which educational methods work best, or how the heck you’d measure that anyway. But we DO believe STRONGLY in giving kids the time, space and freedom to come up with their own games, interests and explorations, when they’re very young and then onward throughout childhood. Heck, throughout adulthood!

I personally think some drilling makes sense and am really sorry my kids’ elementary school never made them memorize the multiplication tables, or basic grammar rules. (Put the grammar back in grammar school!) But the idea that more class time always trumps more free time belies my own childhood, which was “wasted” till kindergarten just hanging out with my blocks, crayons and Free-Range mom.

A privilege for which I’m grateful. – L 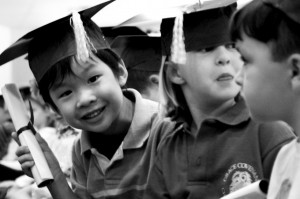 Does it matter if this pre-k grad can read his diploma? (What if it’s in Latin?)

Most Horrifying “Stay in School” Ad…Ever?
Add to This “Bubble List” — Things for Kids to Master Before 18!

89 Responses to Pre-K vs Free Play: Thoughts on Universal Pre-School