Readers — rhhynzaafs
This is a wonderful and well-researched piece on Slate by Linda Rodriguez McRobbie, who seems to have written articles on everything that interests and outrages me, including Satanic panic  (a FANTASTIC and oh-so-disturbing story), and how junk science can put innocent people behind bars for a very long time. But this time she’s writing about high-tech baby monitors like the Mimo and Owlet, sold to parents as essential for peace of mind: 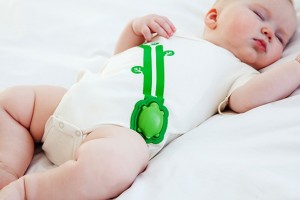 If only mom had an iron lung to attach me to, then she could be SURE I’m breathing!

[The American Academy of Pediatricians advises] “Avoid commercial devices marketed to reduce the risk of SIDS. … There is no evidence that these devices reduce the risk of SIDS or suffocation or that they are safe.” And: “Do not use home cardiorespiratory monitors as a strategy to reduce the risk of SIDS. … They might be of value for selected infants but should not be used routinely.” (In fact, there’s some evidence that they might not be safe: In November, monitor behemoth Angelcare voluntarily recalled 600,000 under-mattress sensor pads after two infants died of strangulation when the cord attached to the pad wrapped around their necks.)

The point is clear: Infant monitors, even the newest generation of smartphone-friendly wearable tech, do not reduce the risk of SIDS. And while the creators of devices like Mimo agree, Dr. Claire McCarthy, a pediatrician at Boston Children’s Hospital and a professor of pediatrics at Harvard Medical School, calls Mimo’s claim that it is not presenting its device as SIDS protection “disingenuous”…

Lenore here: Disingenuous is a nice word for “Hucksterism.” Not only can’t these devices prevent SIDS, they actually spread EXCESS worry by making it seem like a sleeping baby is in danger every single second. No wonder parents are so crazed with fear. NOTHING — not even a baby in a crib — is safe enough for us to let our guard down a sec.

And so begins the great parent freak-out, brought to us  by the endlessly inventive and seemingly recession-proof Child Safety-Industrial Complex.