The dysieisdan
Tallahassee Democrat reports that a bill filed by Rep. Emily Slosberg, D-Boca Raton would make it illegal to leave a child age 6 or younger in the car for any length of time.

But why? Considering more kids die in parking lots than in parked cars, and that the kids who DO die in parked cars were forgotten there for an average of 4.6 HOURS, not a few minutes, this bill is motivated by a misguided sense of danger.

No one thinks kids should wait in cars for a long time, but that is already against the law in Florida. Making this new law just seems to criminalize convenience, as if convenience = negligence = death.

The proposal (HB 115), filed for consideration during the 2018 legislative session, would be stricter than current law. Adults currently can’t leave children in vehicles for more than 15 minutes or for any period of time if the motor is running, the health of a child is in danger or a child appears to be in distress.

Under Slosberg’s proposal, violations would be punishable by a second-degree misdemeanor charge, which carries a penalty of up to $500 and 60 days jail.

Violating current law is considered a noncriminal traffic infraction that carries a fine between $50 and $500. Felony charges are already in place if a child is harmed.

The word for this kind of bill is overkill. It’s as if, desperate to prove, “I care about kids!”, a representative casts about for a bill that will shout her child-caring virtue. And if that legislation already exists, as it does in Florida, they then have to bump it up, as if to say, “I care MORE!” Which means the next legislator will have to say, “Even kids under 12 should never be left alone in the car!” And the next: “Parents who let their kids wait in the car while they get the dry cleaning should face a year in solitary!” And the next: “No more driving kids in Florida!”

Which, come to think of it…

Anyway, here’s where I plug the amazing study that looked at why we keep criminalizing parents for activities we disapprove of that aren’t statistically dangerous. (It has to do with moral disapproval.)

And just because I received this letter on the same day as this proposed bill, here’s how this obsession with kids waiting nanoseconds in the car plays out in the real world:

I thought I would share with you what happened to me this morning. I was dropping one of my children off at preschool. The school has a carport right next to the front doors, once inside those front doors is a computer you punch in your kiddo’s code, and off they go. It doesn’t even take 2 minutes. School policy is if you use the carport, do not turn your car off. That is how quick they plan the “dropping kids off” should be.

The last 3 weeks I have parked and carried in my 3-year-old while dropping off my 5-year-old. And it has been nothing short of dramatic. My 3-year-old throws epic — EPIC meltdowns. Kicks me, screams, cries, she wants to go to school too! But she can’t. So anyway this morning I decide to try what I have seen other parents do, pull up, leave the younger kiddo in the car, drop and dash.

Wouldn’t you know it that the ONE day I do this, a older mom is writing my tag number down and told me she is reporting me for neglect!!!

I wasn’t even in there 2 minutes. I followed school policy, heck they suggested I do that because of how disruptive my youngest is. And this no good nosey sanctimommy is writing my tag number down telling me she is reporting me to authorities.

It is impossible to be a parent these days. We have to bubble wrap our kids in false domes of safety, actually causing harm to them because they don’t learn vital skills and no matter what we do we are wrong. My situation, I’m wrong for a tantrum-throwing 3-year-old, and I’m wrong for following suggested school policy. This war against parents has to stop!

Agreed. Let’s start by stopping this bill in Florida. 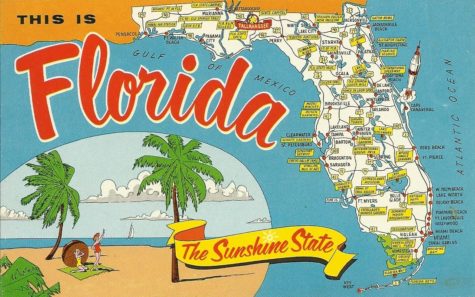 Come for the sunshine, stay for the laws the criminalize rational parenting decisions!

Federal Judge in Colorado Rules that the Sex Offender Registry is Unconstitutional
Dad Teaches his Kids to Ride the Bus. Then CPS Tells Him They Can’t Even Go Outside Alone till Age 10

34 Responses to Proposed Florida Law: Leave Kid in the Car for 1 Minute, Go to Jail for 60 Days