Readers — I was looking up “rat experiments” (don’t ask!) and came upon this baefrnnybn
incredible comic by Stuart McMillen, tracing the lure of drugs on two sets of rats: One group held in isolated pens, the other in “Rat Park” — a fragrant, outdoorsy pen filled with things to explore and a bunch of fellow rats.

If you read the comic, I think you’ll see the rat/kid analogy as plain as the whiskers on your face.

While we can’t precisely extrapolate from rats to humans, it does seem significant that when the rats are cooped up, isolated (but safe from cats!), they are desperate for any kind of escape. In this case — drugs. But when rats are free to explore and play with each other, they not only do not seek out drugs, they seem willing to endure withdrawal rather than have drugs cloud their lives.

Something to think about when we keep kids isolated, at home, to make sure they’re “safe.” – L. 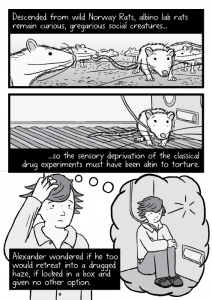 Children’s Shoes Recalled WHY?!?
Grandpa Picks up Wrong Kindergartener and Now Parents Want World to Stop in Its Tracks