One of the scariest things about our over-the-top sex offender laws is how easy it is for a teenager with a girlfriend, boyfriend or sophomoric sense of humor to get labeled a “sex offender,” with all the legal and social ramifications this engenders.

That’s why I nominate the probation and parole officer profiled tyreafsdbi
in Sunday’s Cedar Rapids (IA) Gazette, Â Michelle Reese, as educator of the year. She goes around to middle schools, teaching students about the Puritanical pitfalls ahead.

As shadowed by reporter Erin Jordan, Reese starts out her lecture by showing students a 6-person lineup and asking them to pick out the sex offender. Surprise, she informs them: They are all “offenders,” including the 20-year-old guy, and the woman. Then Reese explains to kids: You, too, Â could end up as one, if you “do something at age 18 that’s going to brand you for the rest of your life.”

The legal age of consent for having sex in Iowa is 16.

By law, an 18- or a 19-year old may not have sex with someone four years younger, even if that person is a willing partner. That means a 17-year-old high school senior dating a 14-year-old freshman could have a legal sexual relationship, as long as there’s no force involved – but once the older partner turns 18, it’s illegal, Reese explains.

There are 123 people required to register as sex offenders in Iowa for this type of crime. Most were convicted of third-degree sex abuse, which requires lifetime registration, but are exempt from the public database because they committed their crime before age 20.

Lifetime registration as a sex offender? For that? How can we tolerate these outrageous laws that damn young people — non-rapists –Â for the rest of their lives? And as Reese points out, the law is even crazier than that:

The eighth-graders cackle when Reese describes a scenario in which a high school senior on a school bus coming home from a sporting event moons passing cars. But if the kid accidentally shows his genitals and the mom driving the passing car is offended, he could get popped for indecent exposure, which carries 10 years on the registry, Reese says.

Who passed this law? How can it get repealed? How many voters even know that there is radioactive legislation like this on the books? And how many kids have a clue? That’s why what Reese is doing is such a godsend, giving wide-eyed young ‘uns a glimpse of the Draconian regime they are living under — before they find out in court.

Reese is among corrections officials who want to see Iowa’s sex-offender laws relaxed for some teen offenders. A subcommittee of the Iowa House Public Safety Committee proposed legislation in 2014 that would have allowed people convicted of sex crimes at 18, without force, and with victims 13 or older, to apply for early release from registry requirements.

The proposal was passed in the Senate but died in the House.

Maybe as the Presidential candidates traipse around the state they can promise that, if elected, they will encourage national legislation decriminalizing consensual sex between teens, and making mooning into something a little less than a crime punishable with a 10-year sentence. – L 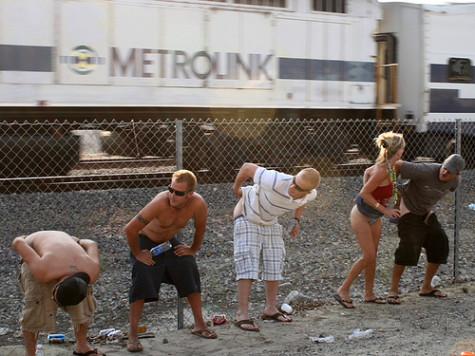 10 years as a registered sex offender for this??? (Chuck Coker, photog.)

Last Halloween Thought: Maybe Parents Should Not EXPECT to Feel “Peace of Mind”
UPDATE: The Day for Daniel

50 Responses to Real Sex Ed Means Teaching Teens, “This Is How You Could Get Labeled a ‘Sex Offender'”