What tdiizabsfb
does it take to raise a child? Parents? A village? Or, now, a robot?

The Institute, the newsletter of the Institute of Electrical and Electronics Engineers (IEEE), reports thatÂ there are at least two robot nannies coming on board. Writes Ian Chant:

Kuri is a roving robotÂ that roams around the home to assist with tasks such as waking up the kids when itâ€™s time to get ready for school, telling bedtime stories, and singing the childrenâ€™s favorite songs. When parents are not home, they can view their children through the robotâ€™s built-in cameras, which they can monitor via a mobile app.

Aristotle, which I consider to be a baby monitor on steroids, is similar to the Amazon Echo digital assistant, only the voice-activation technology is designed to communicate with your child. For example, Aristotle automatically recognizes when a baby wakes up when it makes a sound and can soothe it to sleep with a lullaby or turn on a night-light. The device also can alert you when the supply of diapers is low. Whatâ€™s more, Aristotle can play games with toddlers, such as having them guess which animal noise it is making or the shape displayed on its screen.

Okay — we obviously already use alarm clocks to help ourselves wake up. A robot doing the job doesn’t seem that, well, alarming. And when my kids were babies, I’d have been thrilled if some gadget that wasn’t zombie-like me could get them back to sleep at 3 a.m.

But while I’m glad that technology has made so much of modern life easier — including publishing — what does it mean for kids? Or even the expectations of what a parent (and hence a parent substitute) should be doing?

The Institute, whose organization represents 420,000 engineers, wondered this, too, and interviewedÂ  IEEE Life Senior Member Jim Isaak, vice president of the IEEE Society on Social Implications of Technology.

As a parent, do you think bringing robot nannies into the home can be helpful?

These technologies could be designed to help children develop independence and critical-thinking skills, as well as explore their own unique talents. And more likely than not, parents are going to use these devices to mirror their own intentions, such as having the device remind kids to practice the piano or help them with their homework. Furthermore, the robot might notice that the child is particularly gifted at quantum mechanics, and notify the parents of her skills.

Of course, kids could also become so enthralled by their robots that they prefer interaction with them over their parents, and may find it more difficult to develop human connections. The children may even become dependent on the robot, especially since it will know them better than others could.

What aspects of the technology should parents be wary of?

These devices come with obvious hacking risks, such as people listening in or watching your child, whether a neighbor or a government agency. But some vulnerabilities are subtler than that. For example, a device like the Aristotle could potentially sell or promote products to young children, either explicitly or implicitly, when telling stories or making recommendations.

It may also be difficult to wean children away from a robot as they get older. Children already have a difficult time giving up their favorite dolls, blankets, or even imaginary friends. What parents will do to disconnect their kids from their robot nannies is an open question.

And here are some of MY concerns:

Eventually, most parents give up nagging the child to practice piano. Or at least this parent did. But a robot that never gets tired of hectoring, programmed by a parent grateful that AT LAST a taskmaster exists more steely than your average fourth grader, means that kids are sort of being programmed by proxy. We program the nanny who programs the kid, without the age-old give-and-take of humans.

What’s more, robots, like video games, are always “on” when they’re on — always ready to engage. That seems like it would foster a dependence on constant electronic stimulation, as well as the expectation that someone (albeit a robot) should be paying constant attention to you. That leaves no downtime for kids to get bored and creative, or even used to their own company.

The fact that the robot is also a camera is another concern, because it normalizes the idea that it’s too risky to give kids any unsupervised time, even as kids get the message that living under constant surveillance is simply prudent.

And of course, there’s the whole realm of surprise, which is what makes humans so human: I say something that reminds you of a time in your childhood or whatever, and there a conversation grows. Even a well-programmed robot who doesn’t accidentally keep singing, “The Wheels on the Bus,” can’t go off on a reverie about the first time it caught the bus with grandma to go get a banana milkshake.

So basically, I am worried, not just because of the weirdness of a high-tech nanny (all tech seems weird at first), but because parenting is not about getting the kid dressed, fed and out the door. It’s about what happens when those are happening. – L. 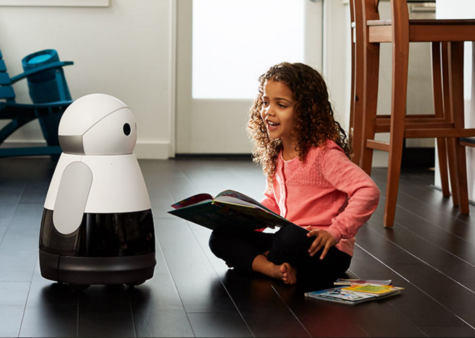 Kuri, can you and daddy give me a baby brother?

UPDATE: Lowering the Bar for “Attempted Luring”
An Uber for Kids: Genius or the End of Childhood Freedom?