Hi Readers! This is the kind of story that makes me bite off little pieces of my own arm in frustration (almost. Ok, let’s just say it makes me nuts.)

An elementary school in Toledo, Ohio sent home a note that said a stranger had been speaking to some of the students at a popular bakery on their way to school.  According to this tytesideha
story on WTOL:

The letter said, “The situation is now in the hands of the police. Fortunately for us today, all of our children are safe.”

The letter also tells parents to remind their kids to report suspicious people. Parents were shocked.

“That makes me nervous. I want my kids to come to school and be safe,” said Gail Hodson, a Harvard Elementary parent.

Excuse me, m’am, are you shocked by the idea that your kid might someday encounter an adult male you did not personally vet first? Maybe it’s time to move to another planet.

But wait — the story gets a little weirder. Turns out that the man is a regular at the bakery and it was when he was there that he offered some kids some donuts.

School administrators left those facts out,  and defended themselves later by saying that the alarm was, if nothing else, a “teachable moment,  and they sent the letter home to be proactive, before misinformation spread.”

Um…doesn’t that sound like exactly what they made happen? This letter WAS the misinformation, and the school spread it! As far as teachable moments go, this one taught kids to be suspicious, scared and unfriendly no matter how unwarranted. Worst-first thinking in action!

Then again,  just maybe it taught them that their school has gone absolutely ape with fear and can’t tell the difference between a sweetroll  and Sweeney Todd. If so, that letter has done some good. – L

ADDENDUM: While we’re on the subject of stranger danger, here’s another little tidbit: A man in a van asking a little girl if she’d seen his puppy turns out to have been (sit down) LOOKING FOR HIS PUPPY. Here’s the story. Weird,  right? 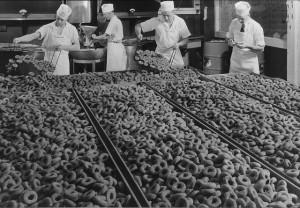 “Am I Wrong to Let My 6-year-old Walk Around the Corner?”
You’ll Cry! You’ll Cheer! You Won’t Believe This Kid!