Readers rsbynnykaa
— Schools shootings are rare and random. They are also horrifying. When we hear about one, joy Â drains out of life for a while. It is into that vacuum that “solutions” rush in.

The latest is a system of censors that supposedly can identify where a shot is coming from, should a madman enter a building. Made by Shooter Detection Systems in Massachusetts, the system can costÂ $20,000 to $100,000 per school.Â A grammar school in Methuen, Mass., was used on Veteran’s Day to demonstrate the product. As the Associated Press’ Philip Marcelo writes:

In the live demonstration, the “gunman” entered the school armed with an assault rifle, opening fire with dummy rounds first in the school library then rampaging through hallways and classrooms. But he had only a few minutes to wreak havoc.

Smoke alarm-sized sensors installed in classrooms, hallways and other points throughout the building were activated by the sounds of gunfire, and police officers were immediately able to track his movements and quickly subdue him.

Nearly 100 people, including U.S. Rep. Niki Tsongas and regional law enforcement officers, gathered in the school auditorium to observe the demonstration of what the school district bills as the first such system operating in a public school in the U.S.

Police Chief Joseph Solomon said he believes such systems should be required in many public buildings, just as fire suppression systems and smoke detectors are.

I do love smoke detectors. And I do want kids to be safe. And the thing about detectors versus background checking every human who enters the school is that the detectors are passive and don’t discourage community.

But considering the rarity of school shootings, does it make sense to equip all schools, at considerable cost, with this technology? It’s sort of the same question I have about the TSA: Given the rarity of terrorists on planes, does it make sense to spend billions of dollars and man-hours on throwing out travelers’ water bottles? At what point do we say that there’s only so much preparing for the worst-of-the-worst that makes sense?

The bureaucrats and insurance companies will say that even the tiniest chance of danger is one we cannot take. Cost, in dollars or trust or convenience (keeping voters out of the schools, for instance), Â is considered an indecent question. Â So when can we say, “The world is not completely risk-free, but that’s okay”? Â Is it never? – L 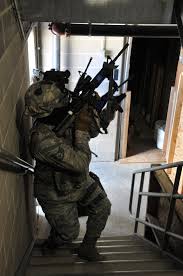 An active shooter drill. (Not the one at the school, for photo rights issues.)

98 Responses to School Shooter Sensors: Like Smoke Alarms, But For Bullets