UPDATE! ydnatzfzhr
I love this comment so much, I have to highlight it here:

“When I was a little girl, an unarmed adult wandering the halls was likely to be questioned, not presumed to be a psychotic mass murderer.”

The three news reports followed the same format: Television reporters walked into schools with hidden cameras, under the premise of testing the security measures. Each time, the anchors provided a sobering assessment of the findings.

Similarly, an anchor with the NBC affiliate in St. Louis prefaced a story by saying, â€œSome of it will disturb you.â€

What disturbed ME — aside from the schools that went on lockdown, the kids made to cower in the classroom, and the not insignificant possibility of someone shooting the reporter — was summed up by Al Tomkins, senior faculty for broadcasting and online at the Poynter Institute, who told Eligon:

â€œWhat happens is youâ€™re spending all this energy and time investigating school safety when thatâ€™s already the single safest place for your child anyway… [This] sort of reaffirms the false notion that my kids are really in danger at school when theyâ€™re not.â€

Exactly. Like all the sweeps week stories where reporters go to playgrounds to film how easily kids can be lured away — as if to suggest strangers are doing this all the time — this new generation of reporters would make us believe our kids are in grave danger anytime any adult steps foot in a school.

That outlook reinforces the notion that all strangers are at least somewhat likely to be madmen, and that therefore all schools MUST be hermetically sealed. (See earlier post, “Strangers in the Schools”) The upshot is letters like the one I got a few weeks ago from a mom in an Iowa town of 1000, where students are no longer allowed to hold the door open for ANY adult, even one they know. (Which, in a town of 1000, is probably everyone.)

The media tells itself it does these reports as a public service. It does them for ratings, and the public be damned. – L 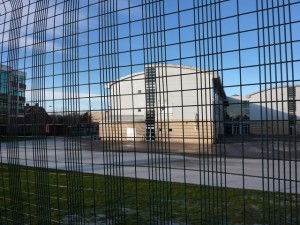 School or prison? Fearmongering reporters push to make them the same!

“I Was Raised Free-Range and It Crippled Me”
UPDATE! School Insists on Babying Blind, Capable Teen (for His Own Good)