Readers iirzknrtte
— As much as parents worry about predators behind the petunias, they worry about predators behind the pixels, too. danah boyd has researched the validity of those  online fears. Not only does her book, “It’s Complicated,” seem totally spot-on, but she is reviewed by the equally remarkable and culture-changing Peter Gray in this post on his Psychology Today blog. I have a section from Peter’s book, Free to Learn, that is mindblowing, too — stay tuned for that post!  Meantime, enjoy Gray’s take on Boyd’s book (with even a shout-out to Free-Range Kids!):

In a nationwide survey, boyd and her colleagues found that 93 percent of parents were concerned that their child might meet a stranger online who would hurt them, while only one percent of them indicated that any of their own children had ever had such an experience. By far the biggest fear expressed by parents was of “sexual predators,” “child molesters,” “pedophiles,” and “sex offenders” who might contact their child through their online participation. This mirrors the fears, revealed in other national and international surveys, that underlie many parents’ decisions to restrict their children from venturing away from home, outdoors, without adult protection. Surprisingly, the respondents to boyd’s survey expressed as much fear for their sons as for their daughters.

As I and others (e.g. Lenore Skenazy in her book Free Range Kids) have reported elsewhere, the “stranger danger” fears that afflict so many parents are greatly overblown. In fact, harm of any kind to children or teens from adult strangers is very rare, and there is little or no evidence that technology or social media has increased such danger. As boyd (p 110) puts it: “Internet-initiated sexual assaults are rare—and the overall number of sex crimes against minors has been steadily declining since 1992—which suggests that the internet has not created a new plague.” Of course, teens and children should all be cautioned about such possibilities, and we should discuss common-sense ways of preventing it with them, but the danger is so small that it is irrational to ban our children from social media because of it.

The fact is, child molestation is far more likely to be perpetrated by people who are well known to the child, such as relatives, trusted family friends, priests, and teachers, than by strangers. Again, in boyd’s (p 110) words: “Although lawmakers are happy to propose interventions that limit youth’s rights to access online spaces, they have not proposed laws to outlaw children’s access to religious institutions, schools, or homes, even though these are statistically more common sites of victimization.”

Read the rest of the review here! 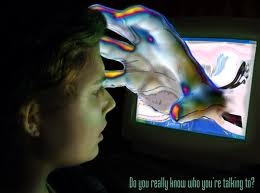 Goodness Me! Will Nobody Help This Child Being “Kidnapped” in Broad Daylight?
A School Valentine…About Lockdown Procedures