Readers — Sometimes I hear about stories in an untimely manner — like berdesrakt
this one, which happened a year ago but is making my blood reach 212 degrees Fahrenheit, so I have to write about it even at this late date:

Apparently Homeland Security felt it needed to train officers to shoot with “No More Hesitation.” I.e., it wanted officers trained not to think twice when faced with danger. So to INSTILL Â that hair-trigger response, our government purchased target practice posters featuring kids, old ladies in their kitchens, and pregnant women.

What’s so disturbing about this? Don’t we WANT our protectors to develop nerves of steel?

No. We want them to develop quick instincts, critical thinking, and calm. The idea of not distinguishing between a likely and unlikely threat reminds me of Zero Tolerance: every “incident” no matter how small or ridiculous is treated the same as a clear and present danger. Thus a kid with a pen knife is treated as harshly as a kid with an Uzi. Homeland Security seems equally bent on creating a culture of obtuseness: “I don’t care if it’s a guy from Chechnya who bought a one-way ticket with cash or a gray-haired lady eating All-Bran in her kitchen, you never know who could be a terrorist!”

Moreover, when we start viewing absolutely everyone as a possible threat, it is a different world we see: A world filled with evil and disguises, rather than the world we really live in: far from perfect, but hardly Halo 3. Practicing on the target of a granny, or tween girl in her driveway, reinforces the idea that we are under siege by everyone, everywhere. Trust no one, ever. Be on guard at all times.

A couple of years ago I was speaking at a convention of school bus fleet owners. After my talk, which was about how we got so scared for our children, the next speaker came on stage: She was from the FBI and she spent an hour talking about how school bus drivers must always be on the alert for terrorists. She told the owners to tell their drivers to look out for anyone they saw along the bus route who wasn’t normally there. “I don’t care if it’s a mother with her three children. If she wasn’t there yesterday, WHY is she there today?” That’s not an exact quote, but it is the example she gave: Fear for the worst if you suddenly see a mom you don’t know, and her young kids.

The chances that a mom with three young kids was walking near the school bus with the intention of blowing it up — those odds were not discussed. The mere fact that the momÂ  COULD blow up the bus was enough to merit a warning from this government employee.

It is good to be prepared. It is not good, or even safe, to be paranoid. When we are told that using our own perceptions, knowledge, compassion and humanity is a HINDRANCE to safety, we are being brainwashed into hysteria.

I’d rather have officers hesitate just long enough to figure out what’s actually going on, than have them so scared and suspicious of everyone that they aim, shoot, and then think. Â – L 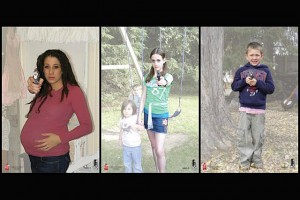 Don’t shoot till you see the whites of the eyes of the fetus?

Motherhood: World’s Toughest Job — Not
Of Easter Eggs and Kidnapping

41 Responses to Shoot the Mom