This wonderful azkftbshtn
essayÂ  by Stephanie Fairyington states it baldly: Why have we decided that adults should give their seats to children, rather than vice versa? On the blog CityLab, she writes of a recent New York City subway trip with her friend:

[We] were on a Brooklyn-bound D train when a family boarded with their son, who looked about six. The mother kept staring and rolling her eyes at us for not giving up our seats to her child. She testily said aloud: “Don’t worry, sweetheart, someone will get off soon and you can have a seat.” Huh?Â Really?Â The kid looked hearty and healthy to meâ€”and very pleased to be standing on his own two hoofs. When someone nearby finally got up, the woman rushed her son over to the empty seat as though he desperately needed it.

As a parent myself, I understand how wearying motherhood can beâ€”especially on a crowded train. And itâ€™s true that a personâ€™s disability or need for a seat may not be visible to the naked eye. But, generally, I think giving up one’s seat to a kid old enough to stand on his or her own is a bad message and a symptom of a culture of parenting in America that enfeebles kids.

….Underlying the unspoken pressure to surrender our seats to youths is the belittling belief that they are limited and delicate. But when we treat them that way, weâ€™re not giving them enough creditâ€”or enough room to grow.

I agree: There’s a certain assumption of child fragility that is inaccurate and insulting.

So I emailed a bit with Stephanie, who told me the article is generating a ton of blowback. Naturally! Â Anytime anyone questions any aspect of parenting, it starts a civil (or uncivil) war. But I like the fact she is questioning a social norm.

I also wonder when and why seating priorities changed — or was this perhaps always the way it worked? Anyone with historical knowledge, weigh in!

And meantime, let me thank anyone, young or old, who gets up to give someone else a seat. May there be no holding lights ahead on your journeys large and small. – L. 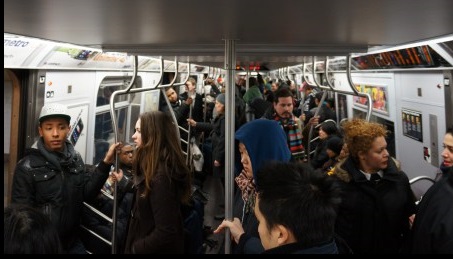 Mapping The Places You Played Outside as a Kid
Mom Arrested for Watching Her Child from Afar, after Busybodies Call Cops

72 Responses to Should You Give Your Subway Seat to a Kid?