Hi all! This krfzkneesh
story was sent in with a note I sort of agree with: A school in Illinois is randomly assigning prom dates, thus removing the anxiety of asking/not-getting-asked. So, wrote the note-sender, isn’t that assuming young people lack even the basic social and emotional resilience to deal with the time-honored ritual?

Well, yes, perhaps. But the tradition at this school began in 1926, so it’s not some newfangled coddling. And while of course kids can handle some embarrassment and disappointment, Free-Range figures there’s enough to go around even without this one particular hurdle. And there’s something about rising to this particular occasion — being attentive to whomever you’re assigned — that strikes me as requiring maturity as well.

Of course I don’t want gay students to have to play “straight” for the event, but provided no one is forced into this pool, I find it charming. I’m just not sure why.

Is it the romantic comedy fan in me, who can just see the prom reunion 25 years later, with the least likely couples still happily married, their children rolling their eyes at being assigned each other? Is it the inveterate party thrower in me, always eager to introduce new people and watch them share a laugh? Or is it the high school student still deep down there in there (sigh), who skipped the prom — no boyfriend, no big interest in the prom, and no tradition, yet, of kids attending date-less — happy to see an alternative?

Truth is, I’m not sure. But I thought we could chew on this one today. Voila:

This is Aquin’s 91st prom draw. Here’s how it works: the boys drew the names of girls at random in the library while the girls waited for them in the gym.

Then the boys came out and performed a skit before they revealed who their date is. It’s a tradition, the school says, is about bonding with classmates.

“I think most people are in disbelief and a lot of people say they would hate it,” Junior Class Adviser Michelle Gallagher said. “But I think after they kind of hear the rest of the story and hear what goes into it I think a lot of people are actually intrigued by it. It’s less of a date and more like something fun to do with your

On Youtube I found this 2009 video of the prom draw, watched it, and am still smiling. There’s something uplifting about the idea of everyone sharing an experience together. Simple as that. – L. 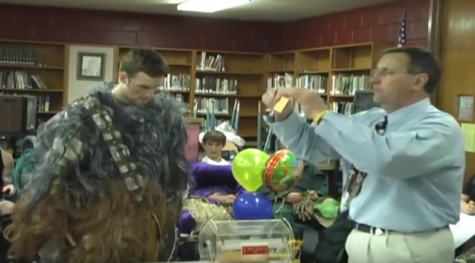 Student waiting to hear the name of his date at the Aquin High School Prom Draw  (2009).

“How About You Raise Your Kids YOUR Way, And I Raise Mine?” — A Starbucks Confrontation
“Children, Get Your Poison Barley and Kill the Squirrels!”