Kids age 6 are old enough to walk themselves to school, Spanish officials are telling parents. A seven-community experiment begun there in 2010 has been hailed as a success by researchers who say that allowing first graders to walk without adult supervision “builds their self-confidence.”

According to this htarzebthz
piece in The Washington Post by Rick Noack, the experiment was created to counter the pan-European decline in kids getting themselves to school:

Surveys show that the share of German 6-year-olds who walk to school alone declined to 17 percent in 2000 from 91 percent in 1970. Figures from the United Kingdom show a similarly dramatic decline.

Such numbers worryÂ education researchers in Europe who argue that children should be allowed to experiment as much as possible to develop skills from an early age onward.Â As European countries reconsider they might end up reversing theÂ decades-long decline.

As in Spain, public officials in other European countries [now] are openly encouraging that change. German authorities are regularly advising parents on how to make 6- or 7-year-olds accustomed to walking to school alone.

Great! So how does America fit in?

In the United States, such practices would likely beÂ much more controversial. Cases of â€œfree rangeâ€ parents who allowed their children to play outside without observing them have repeatedly made headlinesÂ in recent years. American children spend about 90 percent of their time indoors in their parents’ home, according to a recent study by the University of California.

There’s a statistic for you. Wow. I’m hoping that Europe’s budding bravery will shame us over here, but from the 30 or so comments on the Post piece, the reaction remains mixed:

Well, glory be! Could Europe be dewimpifying? And could North Americans follow?

Still, it’s clear that it’s not just a few of us Free-Rangers feeling that something has gone massively wrong when we don’t trust kids to do the same everyday activities we did at their age. As the Italian psychologist behind the Spanish program told the Post: Letting kids walk alone can be seen as abandonment, but actually it’s love: “I leave you alone because I trust you.” 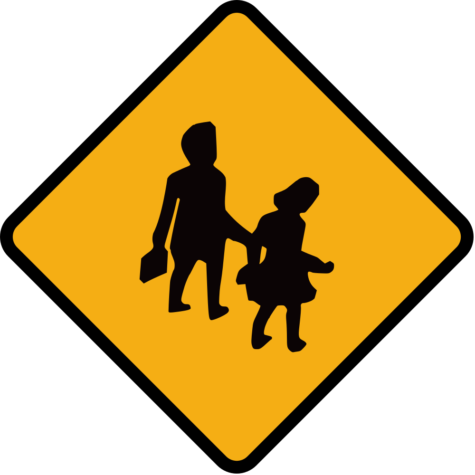 Europe, waking up from its fear-induced coma, wonders: Why did we stop letting kids do this?Â

Beaverton, Oregon, Library Rule: Kids Under 10 Must Be “Within Sightlines of Parents” at All Times
Dear Parents: It is Raining! We Are Doing our Utmost to Prevent Your Child From Getting Wet at Pick-Up

20 Responses to Spain to Parents: Let Your 6-Year-Olds Walk to School!