April 4, 2017
Bryce rktfarsazy
Maine, an Alabama grandson who puts all other grandsons to shame, chose as his date to the Eufaula High School prom: Grandma.
Â .
At first, the Washington Post reports, Grandma — that is, Catherine Maine — demurred:

“I just thought, well, itâ€™s just so nice that he wanted me to go,â€ CatherineÂ toldÂ WTVM. â€œI kept asking him, â€˜Donâ€™t you want to take someone else?â€™ But he kept saying, â€˜No, I want my Nanny.â€™ So I was just so shocked, privileged that he asked me.â€
Â .

â€œMy grandma is the most important woman in my life and sheâ€™s never had a prom before so I figured why not let her go with me,â€ BryceÂ toldÂ â€œInside Edition.â€

…Catherine, 69, prepared for the April 8 event by purchasing a new dress to wear on the special night, as word of her coming attendance trickled out into the small community. Somehow, the schoolâ€™s administrators got wind of Bryceâ€™s plans â€” and thatâ€™s when they fell apart.

Turns out the school has an age limit on prom goers, 20, which grandma exceeded by a few decades.

So the school said nix, no, no way, etc. etc. But here’s why. Can you guess? Come on — of course you can. It’s the blanket wet enough to dampen any fun anywhere, ever: The safety of our precious students! As Eufaula City Schools principal Steve Hawkins said:

â€œSafety of students and staff is the first and most important of the many tasks of a school administrator. For the 10 years I have been high school principal, we have denied requests each year from students asking to bring older dates to prom. We do not chance leaving any stone unturned when it comes to safety. Most high schools have an age limit for prom attendees.â€…

BryceÂ toldÂ WTVM the reason the school gave him was â€œalcohol â€¦ in case, you know, she was trying to distribute it to minors.â€

Yeah, that is so extremely likely. Granny’s going to be the one sneaking in alcohol, not one of those 18-year-old whippersnappers. Why, they’re under age!

So for “safety’s sake” the principal is teaching students the important life lesson that love, kindness, flexibilty and family all pale compared to the regal rigidity of a bureaucrat.

Meantime, al.com news reports that grandson and grandma are going to get dressed up and go out for a night on the town anyway, most likely at a local country club that understands decency (and, okay, publicity) and has invited them the night of the prom. And dreamboat grandson Bryce added:

“I picked out some of the songs she liked from back in the day – a lot of Elvis.” 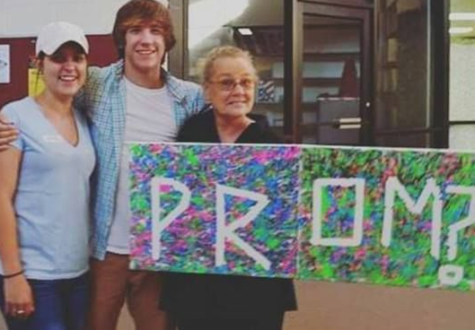 There’s that dangerous woman and her grandson!

“If He’s Got a Pecker, Run Like Hecker!” Good Morning America’s Hypocritical Advice About Stranger Danger
UPDATE! EVEN THE PARENTS SAY THIS WAS NOT AN ATTEMPTED KIDNAPPING! Is This Really “Disturbing Footage of an Attempted Kidnapping at Dunkin’ Donuts”?

46 Responses to Teen Invites Grandma to Prom, But School Says No — She’s a Danger!