Readers — In response to my mini ytkddnatfe
rant yesterdayÂ about coach passengers not being allowed to use the lavatories closer to the front of the plane due to “heightened security” concerns, one commenter sent along this item from techdirt: A leaked (ha ha! Bathrooms? Leak?) TSA document stating:

â€œAs of mid-2011, terrorist threat groups present in the Homeland are not known to be actively plotting against civil aviation targets or airports; instead, their focus is on fundraising, recruiting, and propagandizing.

In other words, the TSA knows darn well that it is engaging in security theater, and yet it persists, for reasons we can’t know, but which possibly include anything from public reassurance to job security.

The thing about public reassurance, however, is that in order to put us at “ease” with its rules and searches, it has to first make us believe there is a threat. In that, it reminds me of all the baby safety products out there, that first must convince us that our children could get HURT by, say, crawling,before we’d ever buy baby knee pads to protect them.

Similarly, rules and laws protecting kids from nearly non-existent dangers (e.g., laws against children waiting in cars for a short time, or rules requiring background checks for parents on field trips) make it seem like our kids are under constant threat. But they aren’t.

We live in safe times, and yet are forced to submit to safeguards that aren’t guarding us from anything — unless you think nail files, 4-oz containers of shampoo, postage stamps featuring kids doing helmet-less headstands, and children left briefly unsupervised are all truly, terrifyingly dangerous. – L 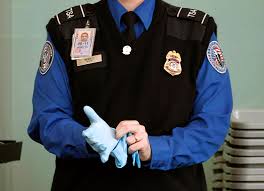