Jonathan beebrdktnb
Haidt, the NYU Professor who, with First Amendment firebrand Greg Lukianoff co-authored the explosive Atlantic piece,”The Coddling of the American Mind,” was asked how to prevent another wave of kids on campus who can’t handle reading a disturbing book, or sharing the campus with a visiting speaker whose views contrast with their own. He was interviewed for Firstthings, the journal of religion and public life, by Dominic Bouck, O.P, a Dominican brother of the Province of St. Joseph, in an article titled “Revenge of the Coddled”:

BOUCK: So how do we move forward, out of this vindictive attack culture? Think young.

HAIDT: Children are anti-fragile. They have to have many, many experiences of failure, fear, and being challenged. Then they have to figure out ways to get themselves through it. If you deprive children of those experiences for eighteen years and then send them to college, they cannot cope. They don’t know what to do. The first time a romantic relationship fails or they get a low grade, they are not prepared because they have been rendered fragile by their childhoods. So until we can change childhood in America, we won’t be able to roll this back and make room of open debate.

My biggest prescription is that in every hospital delivery room, along with that first set of free diapers, should come the book: Free-Range Kids by Lenore Skenazy. If everyone in America read the book Free-Range Kids the problem would be over in 21 years, when the first set of tougher kids filled our universities.

Ahem. Must “Woo-hoo!” But beyond that, his prescription deserves another moment of reflection. Because, as those of you who have read my book know, it’s not really a “how to parent” book. It’s a, “How did we get so scared about everything our children do/see/eat/hear/watch/try/encounter? And how can we come to recognize that while this worry FEELS instinctive, it is actually ‘normal anxiety’ magnified and twisted by a society bent on shoving fear down our throats?”

So the way to raise resilient kids is to be skeptical about the message we get all the time that they are just moments from doom: An encounter that will haunt them, a loss that will derail them, or an unsupervised couple of minutes that will result in their disappearance. Our society obsesses about the way kids can die in an instant, and ignores the fact that 99.9999% of them won’t, and most of THOSE will emerge no worse (and possibly better) for the wear.

Haidt’s premise is that by avoiding more and more of our “fear triggers” (like, “She’ll die if she goes around the corner without me!”) we give those fears more power. They grow, and so does our kids’ anxiety.

I love safety, but it’s true that once we let our kids do things on their own, the pride and confidence that they feel and that WE feel goes a long way to restoring “normal anxiety” back to its set point, instead of the red alert it is on today, all the time. Including on campus. – L 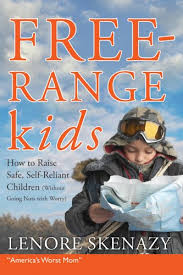 It’s not ME saying to read this particular book to save America from a future  overwrought with fear and fragility, it’s the “Coddling” guy!

Stop Asking My 6 Year Old Why She Is Outside On Her Own!
Back to the Future: Was Doc “Grooming” Marty?

52 Responses to The Antidote to Fragile Kids on Campus?