Readers: By now you have heard the story of the three Virginia Beach seventh graders who ffbyderbzy
were suspended for playing with Airsoft guns on private property — the yard of one of the kids. A 911 call prompted a police investigation which prompted the school to take action. Yesterday, the school’s disciplinary committee voted unanimously to suspend the boys for the rest of the year, though their case will be up for review on Jan. 27. The principal wrote a letter explaining his actions:

In the course of the investigation, conducted in concert with a police officer and the school division Office of Safety and Loss Control, we identified the children who were firing pellet guns at each other and at people nearÂ the bus stop. Several students verified that they had been hit by pellets and had the marks to support their claims. In one instance, a child was only 10 feet from the bus stop and ran from the shots being fired but was
still hit. Another student claimed to be shot in the back while running away during a previous incident Wednesday, Sept. 11. This child was also shot in the arm and head during Thursdayâ€™s incident. I contacted theÂ school divisionâ€™s Office of Student Leadership and School Board Legal Counsel for guidance. Because students were on their way to or at a school bus stop when they were struck by pellets, the school division hasÂ jurisdiction to take disciplinary actions against those students responsible for the disruption. There is anÂ expectation that all students should be able to travel to and from school in the safest environment possible….

My take? The kids should not be suspended because this is not an issue for the school. It was not on school grounds. When school authorities can reach outside the school building to the bus stops and even beyond, they have over reached. It’s like the time the Pennsylvania school district gave kids laptopsÂ whose webcams photographed them in their homes.

However, I can very much understand the concern of the 911 callers (audio of one call here),who saw a realistic looking gun and wanted to make sure no one was in danger. And if the kids were actually “shooting” other kids who didn’t want to be part of their game, they certainly deserve to be disciplined. The question is: By whom?

I’d say their parents. Â But if the game truly went beyond Â the confines of the yard and kids were getting “shot” against their will, in Virginia Beach or anywhere else, I could even see a cop stopping by to say cut it out. No tickets. No arrests. No paper trail. Just a beat cop saying you kids, go do something else — even shoot the target in your yard.

While this case is one that is making headlines because of the school being so intrusive and harsh, the reality is that those guns look ridiculously realistic. I’d call 911 if I saw a kid trying to hide one, too. It is definitely fine for kids to play on their own property with whatever items their parents allow. But when the items look deadly, it’s not overreach for a neighbor to be concerned. In fact, it’s neighborly. – L. 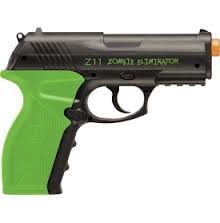 Shiver Me School Administrators! “Pirates” Cause School Lock-out
Is 25 the New 18?

113 Responses to The Three Airsoft Gun 7th Graders Get “Expelled”