Folks, krtkhidzta
here’s a piece by me that’s slightly off topic in that it’s not about kids — per se. But it is about hyper-sensitivity, in this case, to the statue of a male sleepwalker on the Wellesley College campus.

The connection here is this: Free-Range fights the spread of excessive fear. And fear grows on the assumption of fragility, the assumption that Â mere EXPOSURE to anything upsetting or imperfect Â — an idea, a germ, a disappointment, a scrape, a statue — is potentially devastating.

Free-Range Kids says we are stronger than that. We demean kids and adults when we assume they can’t handle everyday life, be it walking to school, playing on a merry-go-round, or encountering an odd statue. – L.Â

Fear and Loathing at Wellesley

A life-like statue of a guy sleepwalking in his underwear awakens a protest by campus feminists.

A realistic-looking statue of a sleepwalking schlub in his underpants has caused an outrage at Wellesley, a women’s college in Massachusetts near Boston. The students are so disturbed that they want himâ€”I mean, itâ€”gone.

Grab the smelling salts, ladies. This is not a prowler, it’s a piece of art.

That distinction doesn’t seem to matter to the 700 angry and aggrieved students, alumni and others who in recent days have signed a petition demanding the removal of artist Tony Matelli’s “Sleepwalker.” They say that, while inanimate, the male image is nonetheless a “trigger”â€”a catalyst capable of stirring up anything from memories of sexual assault to fear of strangers. 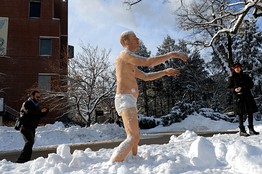 “Sleepwalker” on the campus of Wellesley College.Getty Images

“Wellesley should be a safe place for their students, not a triggering one,” wrote one petition-signer, as if the statue actually made the campus dangerous. That’s a brand-new way of looking atâ€”and trying to legislateâ€”the world. So I checked in with Robert Shibley, senior vice president at the Foundation for Individual Rights in Education, about the Wellesley panic. “It’s the idea that any kind of discomfort is a form of assault,” he noted.

Once we equate making people feel bad with actually attacking them, free expression is basically obsolete, since anything a person does, makes or says could be interpreted as abuse.

Does Free-Range Make Sense After a Shooting?
Moms and Burgers