Readers ksazazkhki
— One of you just sent in this remarkable excerpt from “The Emerald City of Oz,” one of 13 “Wizard of Oz” sequelsÂ L. Frank BaumÂ  churned out. Interestingly, Baum’sÂ Wikipedia bioÂ says that, “His works anticipated such century-later commonplaces asÂ television,Â augmented reality, laptop computers…and the ubiquity of advertising on clothing.”Â  Looks like he also anticipated “worst-first thinking.”Â  Read my recent posts and you’ll see how they almost ALL would fit into this Oz story: 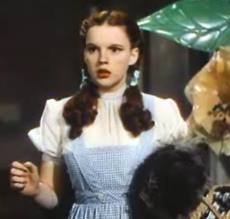 Lions and tigers and bears are nothing compared to predators, Pop-Tart guns and disappointing playdates!

23. How They Encountered the FlutterbudgetsThey were soon among the pretty hills and valleys again, and the Sawhorse sped up hill and down at a fast and easy pace, the roads being hard and smooth. Mile after mile was speedily covered, and before the ride had grown at all tiresome they sighted another village. The place seemed even larger than Rigmarole Town, but was not so attractive in appearance.“This must be Flutterbudget Center,” declared the Wizard. “You see, it’s no trouble at all to find places if you keep to the right road.”“What are the Flutterbudgets like?” inquired Dorothy.“I do not know, my dear. But Ozma has given them a town all their own, and I’ve heard that whenever one of the people becomes a Flutterbudget he is sent to this place to live.”“That is true,” Omby Amby added; “Flutterbudget Center and Rigmarole Town are called ‘the Defensive Settlements of Oz.'”The village they now approached was not built in a valley, but on top of a hill, and the road they followed wound around the hill, like a corkscrew, ascending the hill easily until it came to the town.“Look out!” screamed a voice. “Look out, or you’ll run over my child!”They gazed around and saw a woman standing upon the sidewalk nervously wringing her hands as she gazed at them appealingly.“Where is your child?” asked the Sawhorse.“In the house,” said the woman, bursting into tears; “but if it should happen to be in the road, and you ran over it, those great wheels would crush my darling to jelly. Oh dear! oh dear! Think of my darling child being crushed into jelly by those great wheels!”“Gid-dap!” said the Wizard sharply, and the Sawhorse started on.They had not gone far before a man ran out of a house shouting wildly, “Help! Help!”The Sawhorse stopped short and the Wizard and Uncle Henry and the Shaggy Man and Omby Amby jumped out of the wagon and ran to the poor man’s assistance. Dorothy followed them as quickly as she could.“What’s the matter?” asked the Wizard.“Help! help!” screamed the man; “my wife has cut her finger off and she’s bleeding to death!”Then he turned and rushed back to the house, and all the party went with him. They found a woman in the front dooryard moaning and groaning as if in great pain.“Be brave, madam!” said the Wizard, consolingly. “You won’t die just because you have cut off a finger, you may be sure.”“But I haven’t cut off a finger!” she sobbed.“Then what HAS happened?” asked Dorothy.“I–I pricked my finger with a needle while I was sewing, and–and the blood came!” she replied. “And now I’ll have blood-poisoning, and the doctors will cut off my finger, and that will give me a fever and I shall die!”“Pshaw!” said Dorothy; “I’ve pricked my finger many a time, and nothing happened.”“Really?” asked the woman, brightening and wiping her eyes upon her apron.“Why, it’s nothing at all,” declared the girl. “You’re more scared than hurt.”“Ah, that’s because she’s a Flutterbudget,” said the Wizard, nodding wisely. “I think I know now what these people are like.”

“So do I,” announced Dorothy.

“Oh, boo-hoo-hoo!” sobbed the woman, giving way to a fresh burst of grief.“What’s wrong now?” asked the Shaggy Man.“Oh, suppose I had pricked my foot!” she wailed. “Then the doctors would have cut my foot off, and I’d be lamed for life!”“Surely, ma’am,” replied the Wizard, “and if you’d pricked your nose they might cut your head off. But you see you didn’t.”“But I might have!” she exclaimed, and began to cry again. So they left her and drove away in their wagon. And her husband came out and began calling “Help!” as he had before; but no one seemed to pay any attention to him….

At the next street corner a woman rushed up to them crying:“Save my baby! Oh, good, kind people, save my baby!”“Is it in danger?” asked Dorothy, noticing that the child was clasped in her arms and seemed sleeping peacefully.“Yes, indeed,” said the woman, nervously. “If I should go into the house and throw my child out of the window, it would roll way down to the bottom of the hill; and then if there were a lot of tigers and bears down there, they would tear my darling babe to pieces and eat it up!”“Are there any tigers and bears in this neighborhood?” the Wizard asked.“I’ve never heard of any,” admitted the woman, “but if there were–““Have you any idea of throwing your baby out of the window?” questioned the little man.“None at all,” she said; “but if–““All your troubles are due to those ‘ifs’,” declared the Wizard. “If you were not a Flutterbudget you wouldn’t worry.”“There’s another ‘if’,” replied the woman. “Are you a Flutterbudget, too?”“I will be, if I stay here long,” exclaimed the Wizard, nervously.“Another ‘if’!” cried the woman.But the Wizard did not stop to argue with her. He made the Sawhorse canter all the way down the hill, and only breathed easily when they were miles away from the village.

After they had ridden in silence for a while Dorothy turned to the little man and asked:

“Do ‘ifs’ really make Flutterbudgets?”“I think the ‘ifs’ help,” he answered seriously. “Foolish fears, and worries over nothing, with a mixture of nerves and ifs, will soon make a Flutterbudget of any one.”Then there was another long silence, for all the travelers were thinking over this statement, and nearly all decided it must be true.Â

A Kid Gets Lost on a Field Trip: Then and Now
Playing vs. Learning

24 Responses to The Wizard of Oz: Honorary Free-Ranger