UPDATE: itdzedssde
Readers, this is from the mom who wrote the post, who, like me, as been very touched by your emotional support as well as your offers of financial support:

“To all the kind people who have made such supportive comments, thank you very much. Â We are very touched by the offers that have been made of financial contributions, and though we’re not accustomed to asking for help, all of this is causing both families financial hardship, so we are looking into setting something up to accommodate that, and will let you know. Â Unfortunately, we are advised for now to remain anonymous until after the trial, which is some time away yet. Â Again, thank you.”

Readers, This comes to us from a mom in D.C. who, believe it or not, still participated in “Take Our Children to the Park … and Leave Them There” Day. Talk about a dedicatedÂ Free-Ranger! Â And so — her story (long, but worth it):Â

To the man who called the police on two little girls instead of calling their parents:

A couple of weeks ago, on a Sunday at around noon, my family were visiting family friends.Â  Our older child, 6, and theirs, 7, had been playing games on a tablet and getting underfoot all morning, so we sent them outside to get some fresh air.Â  We told them that they could go down to the creek in the woods behind the house, visible from the back windows, where they had been many times before.Â  We made them wear appropriate footwear and packed extra socks and tissues for stuffy noses.Â  We gave them explicit instructions to stay on the near side of the creek.Â  No matter how many times I have reviewed that decision since then, it still always looks like good parenting to me.

Shortly after the girls got to the creek, however, they made another decisionâ€”they decided to continue through the woods on a route they knew, Â walk past the shopping center on the other side, and loop back through another section of woods to the house.Â Â  They wanted to show that they could do it.Â  This was undoubtedly a poor decision, and it has certainly been made abundantly clear to both of them that this is so.Â  It was not, however, inherently unsafe, or somethingÂ Â they were not capable of.Â  It was a poor decision simply because they were disobeying their parents, and creating a situation in which, had anything gone wrong, we would have had no idea where to look for them.Â  Both girls knew where they were going and how to get back, and our daughterâ€™s friend knew her phone number and address.Â  Both girls know how to behave safely around cars.Â  Both girls have even had some self-defense training, if it should come to that.Â  They are competent, responsible little girls, which is why it was so surprising to us that they did what they didâ€”we gave them the freedom they were granted precisely because nothing they had previously done would have lead us to expect this of them, and we trusted them.

They were at the furthest extent of their looping route, less than a thousand feet from the house and twelve minutes after they left us, when they encountered you as they walked through the shopping center, and you stopped and questioned them.Â  They spoke readily to you, because neither of them have been taught that they must not talk to strangers.Â  Strangers are simply people that we donâ€™t know yet, and we refuse to train our children to fear people or shut themselves off from new connections.

Iâ€™m sure that you acted in good faith, sir.Â  I can easily guess that you are a product of a culture that has made much of â€œstranger dangerâ€ and become very uncomfortable with the idea of children on their own, not protected from the oft-imagined lurking predator. Â But I donâ€™t know why you didnâ€™t call us when you were given a phone number that would have reached us immediately.Â  Perhaps you genuinely believed that any parent who would let their children slip away like that was deserving of police scrutiny.Â  Perhaps you have no children, and so imagine that parents can always have perfect control over their young charges, which we clearly didnâ€™t.Â  I very much wish you had just called usâ€”we would have been there in minutes, our children would have been amply horrified by the consequences of their actions, and we would have been duly warned to extend them less trust for a time.

Whatever your reason, you decided that the appropriate thing to do would be to call the police.Â  Did you call 911, I wonder?Â  Did you actually consider two calm, articulate little girls on a walk to be an emergency?Â  I donâ€™t know.Â  Maybe you are just a very firm respecter of authority.

The police came with admirable speed.Â  Somewhat less admirably, they chose to put the girls in the cruiser (with no car seats) rather than, again, resorting to the completely available option of calling their parents to come get them.Â  They brought the girls back to us a total of twenty minutes after they first walked out of the door.Â  They could have just told us what happened and admonished us to keep better tabs on our children.Â  They could have just handed over their official-looking little card about age restrictions (which they incorrectly believed to be law, but which in fact were only county recommendations) and told us not to let it happen again.Â  But you see, when you call the police, this creates pressure on the police to Do Something.Â  So what they did was arrest usâ€”one parent from each family, our choice, with no chance for private conference to decide.Â  They tried to arrest us for felony neglect of a minor, but apparently even the magistrate thought that was ridiculous, so they went for misdemeanor contributing to the delinquency of a minor instead.Â  They informed us that we would be reported to the Department of Social Services and probably contacted by Child Protective Services â€” which we have been.

Now, we have carefully read all of the relevant laws and recommendations since then, and it is clear to us that we have not actually committed any such crime, for the principle reason that our daughters are not delinquent.Â  They are not â€œin need of services,â€ they do not habitually run away, they are certainly not neglected, and they harmed no one. Â  We hope and believe, therefore, that when our court date at long last comes up, we will be acquitted of the charge and we sincerely hope that our records will be expunged, because if they are not, you probably realize that having a criminal record of any sort can be very limiting to oneâ€™s career and opportunities.

By now, as you have been subpoenaed for the trials of both families, you probably realize a little of what you have wrought.Â  I hope that you are dismayed.Â  Even so, I find it difficult to imagine that you have any idea of the fear, shock, humiliation, and rage that our families have experienced because of all this.Â  I find it difficult to imagine that you know what itâ€™s like to be afraid that your own government will punish you for having done your best to be a good parent.Â  To be arrested for absolutely nothing anyone is even claiming that you did, in the middle of a peaceful afternoon of sewing and childcare.Â  To jump every time the phone rings, every time a car slows down.Â  To forget for a few minutes or an hour, as the days go by, and then suddenly remember with a sick feeling in the pit of your stomach.Â  To have to let a stranger into your houseâ€”a stranger with the virtually unchecked power to take your children away from youâ€”so that she can poke around and interrogate your child and decide whether you are fit parents.Â  To see your confident, strong-willed child afraid to play outside or let her little sister do so, because the lesson she has taken from this is to â€œnever go outside.â€

There are also more tangible problemsâ€”several thousand dollars in lawyerâ€™s fees, for example, which we will not get back even if we are declared wholly guiltless. Â And if, heaven forbid, a further miscarriage of justice declares two devoted parents to be criminals, then there will be large fines and much, much larger blots on their record and reputation from then on.

Possibly you believe that, while all of this is unfortunate, it is a necessary side effect of a reasonable effort to keep children safe from predators and abusive or neglectful parents.Â  Do you remember when you were a child?Â  Did you ever roam the neighborhood with your friends, or walk home from school, or go to the gas station to buy candy?Â  Maybe you walked to the library from time to time.Â  We did all of those things, and gained skill, independence, and confidence by doing so.Â  No one believed that our parents were neglectful.Â  Perhaps you believe, as many do, that those are bygone days of relative peace and security.Â  If so, you may be interested to know that this is entirely a media-created illusion, a product of the sheer selling power of horror stories and â€œstranger danger.â€ Â Crime rates, against both children and adults, are actually lower now than when we were children.Â  Whatâ€™s more, the overwhelming majority of missing children are taken by relatives, or run away, or are simply abandoned.Â  Only a tiny fraction of them are kidnapped by strangers.

Our daughters disobeyed us, yes.Â  But did they create an emergency?Â  Were they in imminent danger that required the police?Â  I cannot believe that it is so.Â  By turning to the police for every problem, real or imagined, we waste their time and our money, and we create enormous pressure on them to Prevent Bad Things From Happening and thus to Do Something About It.Â  The consequences of which I hope you now see clearly.Â  By living in fear of the wildly improbable, we deprive our children of the chance to learn and explore and grow up.Â  I hope that next time you see a child in public and donâ€™t see a caretaker right away, youâ€™ll consider just being a good neighbor, maybe asking the child if he or she needs help, maybe waiting by the child until a caretaker can be found if you really, really feel the need.

Maybe you could save another family from the terrible, terrible experience weâ€”and others like usâ€”have had. – D.C. Mom 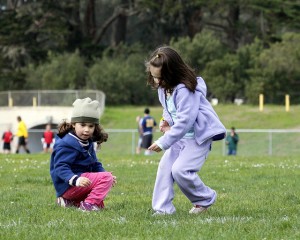 Do we have to call 911 anytime we see kids on their own now?

alone at park, CPS, girls at park, kids alone, kids on own, let kids play, nature deficit, Take Our Children to the Park, Walk to School, what age walk

Turns Out You Can Just Ignore the Killjoy Rules
Schoolyard Off Limits to Kids?

195 Responses to UPDATE: To The Man Who Called the Police on 2 Little Girls Instead of Calling Their Parents