Many of you sent in this hyhhnsinhk
dramatic story of a dresser falling on a Utah 2-year-old and his twin brother rescuing him from underneath it.

It sickens me the way KSL TV news showed the worst part of the video three times in two minutes, but here you have it:

A video monitor in the bedroom of twin brothers Brock and Bowdy Shoff, 2, captured an unsettling incident last week in which a dresser toppled on the pair as Brock climbed in an open drawer.

Brock can be seen trapped for nearly a minute before Bowdy saves his brother by pushing the dresser off the top of him. Brock thankfully did not suffer any serious injuries.

“Bowdy just came around and assessed the situation thinking, ‘I needed to help my twin brother. What do I do here?”’ Kayli Shoff, the boys’ mother, told KSL. “I really believe in a twin bond. You always hear that and I believe these two have it.”

What’s amazing about the story is not just that, ho hum, a 2-year-old saved another 2-year-old, showing what kids are made of. It’s that (as you wrote to me):

1 – The mom was brave enough to share the video, which I do believe will encourage other people to secure their dressers, shelves and TVs to the walls. That’s a win!

2 – The comments on some sites with the story, like this one, are not filled with, “SEND THE MOM TO JAIL!”-types of responses. Other sites, like this one, seem to have proportionally more. My guess is that this has to do with pile-on pitilessness: Once a couple commenters start in with, “Where was the mother???” others do, too, (Here’s a lovely story about another second-guessed mom, and her terrific response.)

3 – “The amazing part is that the story claims that the mom responded by anchoring the dresser to the wall rather than suing Ikea,” as one of you wrote. That is perhaps the most newsworthy angle! – L 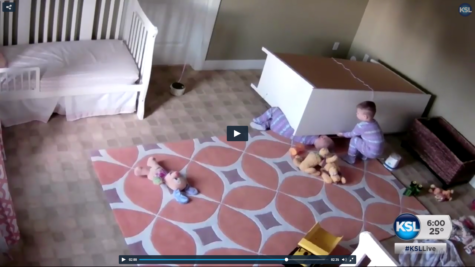 A brother saves his twin from a toppled dresser, and teaches us all a bunch of lessons.

When A Legitimate Movement Goes Overboard
Why Is Every Rainy Day “The Storm of the Century” Now?

35 Responses to Twin, 2, Saves Brother After Dresser Falls On Him