December 17, 2015
.
Remember dibktkdany
the mom put on Illinois Child Abuse Registry for letting her kids, 11, 9 and 5, play at the park outside her window?
.
The state’s Appellate Court has thrown out the “child neglect citation” against her, after her mere two and half year fight against the Department of Child and Family Services. She was helped by the scrappy, brilliant Family Defense Center in Chicago. As Bonnie Miller Rubin in the Chicago Tribune Reports:

“I’m just relieved this is over,”‘ said Natasha Felix, a 27-year-old single mother…”I knew that I didn’t do anything wrong.”

In July 2013, the three children â€” then ages 11, 9 and 5 â€” were left under the supervision of the eldest boy. A passer-by saw the Felix boys, along with their 9-year-old cousin, playing and called the DCFS hotline, unaware that Felix was checking on them from the window of her East Ukrainian Village apartment every 10 minutes, she said.

The youngsters were unharmed, but she was cited for child neglect under a category called “inadequate supervision.” The state statute defines this as “a child under the age of 14 whose parent … leaves the minor without supervision for an unreasonable amount of time, without regard for the mental or physical health or safety of the minor.”

The children were not removed from her home, but the finding of neglect kept her from volunteering at their school and limited her job prospects as the allegation remained in the state’s central registry.

But this week, DCFS reversed course and has filed no opposition to this motion, according to court documents.

“Under the new leadership of Acting Director George Sheldon, the Department has determined that the best course of action is to unfound and expunge Ms. Felix’s case,” DCFS spokesman Andrew Flach said in an email. “Moving forward, the Department will be taking a closer look at similar cases to ensure that we allow caretakers to be prudent parents and considering changes to Department rules and procedures.”

Let’s hear it for George Sheldon! Go, George, go! Change those guidelines, the way Maryland did after that state was internationally embarrassed for Â arresting the Meitiv family twice for letting their kids walk home from the park. It is honorable to recognize when regulations have gone too far, and to do something about it.
Here’s whatÂ Diane Redleaf, director of the Family Defense Center, wrote to me in an email:

It is urgent that child protection agencies stop investigating parents for making basic decisions as to when their children can be alone, can go out and play, and can be left briefly while the parent attends to the business of caring for them.

There need to be standards that say that children are not neglected unless their parents knowingly subject them to serious and immediate risks of harm–i.e. by blatantly disregarding the duties they owe their children.Â  Those duties to not require require parents to protect children from boogeymen who might conceivably snatch them if they are allowed to play.

We need to stop second guessing parents’ decisions by labeling decisions about parenting ‘neglectful’ when no harm to the child has occurred.Â  We’re spending far too much energy in America on investigations of parents who have not hurt their children, and not enough resources helpful to the children whose parents have actually abused them.

So, to recap: Last week we had national legislation passed allowing kids to walk to school, and this week we have a mom exonerated after letting her children play outside. Not bad! – L. 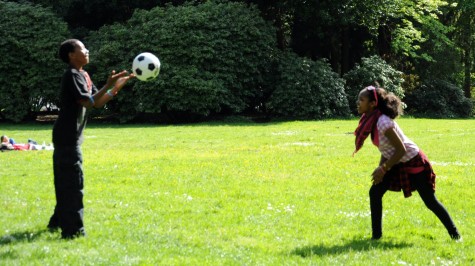 Court rules that maybe you can let your kids play outside and NOT be a child abusing negligent n’er-do-well.Â

Grandma Not Safe Enough to Participate in Grandson’s “Read Aloud” Day
Mom Has Kids, 8 and 10, Wait in Car — Now She’s Charged with Abuse and Neglect

43 Responses to Verdict Reversed! Mom NOT GUILTY of Neglect for Letting Kids, 11, 9 & 5, Play in Park Across the Street