Recall yffyysitii
that last week I got a note from a dad who had just dropped his wife off at college when he realized: She still had the apartment keys! So he turned the car around, went back to the school and let his kids, 2 and 4, wait in the car while he ran in.

It was 47 degrees out. The kids were safe and warm and buckled in. He got the house keys and came back 10 minutes later to find two college employees standing next to his car, glaring.

They told him they were reporting him to the authorities. And sure enough, after he’d gotten home, the doorbell rang. It was the police. They handcuffed him. Took him down to the station. Had him sit in jail for two hours while they “processed” his case. Now he is facing charges of “child neglect in the second degree” — even though his state defines neglect as leaving Â a child “unattended in or at any place for such period of time as may be likely to endanger the health or welfare of such child.”

Just as I’m about to throw in the towel — how can we be so cruel and so crazy when it comes to pseudo danger? — along comes this spot for the VW Pasasat. The reader who sent it in noted that:

AtÂ the end, the dad would have to leave the sleeping kids in the carÂ while he gets milk as requested by his wife.Â  I’m not sure if VW isÂ consciously saying that is OK, but I often left my sleeping kids in aÂ locked car outside a convenience store to grab milk or other late nightÂ needs when they were younger than the kids shown in the commercial.

Is it that VW, being German, innately understands that kids can have a few unsupervised minutes without the world coming to an end? The German high school exchange student we have living with us this year remembers being age three or four when he was first allowed to go get rolls on Sunday mornings, by himself.

So kudos to VW and/or their ad agency. I know VW is dealing with some other issues, but on the “modeling social sanity” front, they are wunderbar. – L. 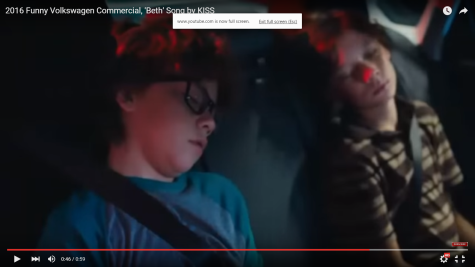 Beth I hear you calling… Wait! You’re not calling the police, are you?

46 Responses to Volkswagen Endorses Letting Kids Wait in the Car a Few Minutes! (I Think)