Hi yitkdhtats
folks! This post comes to us from Â Jay P. Greene, theÂ Â 21st Century Professor of Education Reform. at the University of Arkansas. It’s great to think that someone immersed in education reform is thinking about how important it is for kids to do things on their own, outside the classroom.

Putting On a Show, by Jay P. Greene

It was a staple of Mickey Rooney and Judy Garland movies that kids from the neighborhood would get together to â€œput on a show.â€Â  Someone would get the curtains, someone would build the set, and â€“ after some practice â€“ they would perform a play.Â  Of course, these movies were works of fiction, but they were based on a kernel of truth.Â  Kids do like to get together, dress up in costumes, and put on shows.Â  They tend not to be as good as those in the movies, but kids will organize theater performances by themselves if left to their own devices.

But because kids aren’tÂ left to their own devices as much these days, it is remarkably rare to find young people organizing theater performances by themselves.Â  Instead, these tend to Â be part of a school or youth theater activity organized and supervised by adults.Â  Those can be very positive experiences, but kids donâ€™t learn the responsibility and creativity they could from putting on shows themselves.

Happily, theater organized by young people has not disappeared entirely.Â  In the middle of Americaâ€™s heartland, in Fayetteville, Arkansas, a group of adolescents have formed New Threshold Theatre, which is run completely by young people without adult sponsorship or supervision.Â  My youngest son has joined the group and Iâ€™ve been incredibly impressed with the professional quality of their productions.

They have done all of this by themselves.Â  Theyâ€™ve secured their own performing spaces, sometimes using unused business spaces or renting an auditorium.Â  They find their own costumes and build their own sets.Â  They select the works to be performed, cast the actors, and direct the shows.Â  They even have their own dramaturg.

And all of this is being done by young people.Â  No one told them to do it.Â  It is not a school club.Â  They don’t get grades or class credit.Â  There are no adult advisers.Â Â  It is simply a group of kids who have gotten together to form a theater and video company completely for the fun of it.

I don’t think there is anything else quite like New Threshold Theatre out there these days.Â  Maybe if we structure our kids a little less, we might open up more opportunities for them to organize amazing things for themselves. That would be something to sing about! Â 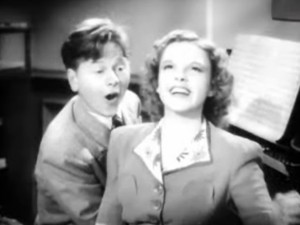 Let’s put on a show…without adults! (Mickey Rooney and Judy Garland back then, and the New Threshold Theatre in Arkansas today.)

Keep Those Terrifying Creeps…er…Voters Out of Our Schools!
Calling Out The Safety Nuts: School Edition

14 Responses to What Happens When Kids Say, “Let’s Put on a Show!” Today