Hi niydayazyr
Folks! This post comes to us from England, where Â independent filmmaker David Bond is making a documentary about Â MARKETING nature. I like that idea because I’d like to do something similar: MARKET the happy, confident childhood kids can enjoy if parents “buy” Â the fact that Â it’s safe. If you have any more ideas on how to market EITHER of these lovely things — nature or Free-Ranging — let’s hear! And good luck to David with his film, Project Wild Thing! – L.

Dear Free-Range Kids:Â Recently I came to a terrible realization. My kids, aged 3 and 5, are more excited by any screen — TV, iPad, whatever — Â than they are by anything else. Even hanging out with me! Cake, cameras, the zoo, parties — they all pale compared to screen time. That’s why I decided to make a feature-lengthÂ documentary film about reconnecting children to nature. (And experiment on my kids!)

When I was a child, Iâ€™d play outside after school. TV wasnâ€™t a priority. Thereâ€™s an argument made today, responsible for increasing time spent on screens in schools, thatÂ technology prepares children for the future. I agree in some respects.Â But is a childhood with increasing screen time and decreasing nature time ideal?

When I take my little treasures outside, I see them change. They become carefree. Â Their eyes focus away from the tiny zone that screens occupy. They become engrossed in the world. Nature in its glory, from dewy lichen to the Armageddon of a proper storm, lifts them up where they belong, where the eagles cry,Â on a mountain high, to quote Joe Cocker.

These embarrassingly hippie-ish thoughts (I’m a proud rationalist) prompted me to make the Project Wild Thing documentary. I wanted to find the answers to these questions: Why don’t children love nature as much as TV? Â And yet why, when they get dumped in it, are they so happy?

When I started making the film, I only wanted to see what would happen if my kids went outside more. Since then,Â Iâ€™ve realized that the things children love and demand are the things that are constantly marketed. So now I believe marketing might be the best way to try to get kids to love nature as much as cartoons and apps.

So Iâ€™ve appointed myself Marketing Director for Nature,Â and spent the last nine months in my new role. I’ve discovered surprising truths about how we sell to children. But I don’t have the deep marketing pockets of Nintendo or Coke, so I’ve had toÂ improvise.

Project Wild Thing follows me from my backyard in London to the boardrooms of Madison Avenue to the Highlands of Ethiopia as I try to persuade apathetic consumers â€“ and my own family â€“ of the benefits of nature.

Along the way I meet naturalists, brain scientists, play experts and marketing professionals, and with their help I put together a team of 8- to 12-year-old kids to try to sell nature to the public.

Itâ€™s an exploration of how weâ€™ve allowed kids to become so disconnected from the natural world, and a look at the things we can do about it.

The film is almost done — we just need to shoot final scenes. But weâ€™re a little short of the funds to complete it. Thatâ€™s why weâ€™ve launched a Kickstarter page.

Weâ€™d love the nature movement to get behind this film. If youâ€™d like to help make it happen, please watch the trailer and check out our Kickstarter page: http://bit.ly/projectwildthing. 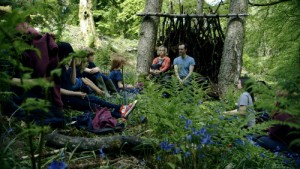 Is TV News Going…Sane? Free-Range Kids on Two Bizarrely Rational TV Shows Last Week
Free-Rangers: Your Children Should be Taken From You! (Signed) A Fed-Up Librarian

28 Responses to What If We Marketed Nature the Way We Market iPads?