Folks iyykbhenyh
— This was a comment made under a piece by me in The Wall Street Journal about how we are criminalizing parents who let their kids wait in the car while they run an errand. The commenter is named Pushpita Prasad and I salute her! – L.Â

Pushpita Prasad: Here’s another very common scenario that plays out daily across America.

Drop off at schools/daycares/pre-schools. You pull into the parking with the kid you actually need to drop of and their younger sibling — who often falls asleep during the drive. It could be raining/snowing/cold/hot outside. Your car in the lot is surrounded by other parents pulling into and backing out of spaces as they make their own drop offs and scurry off to work. Into this scenario of confusion, you need to brutally awaken your sleeping baby/toddler (the one not being dropped of) and drag them both across a parking lot filled with people and cars in a hurry, drop the older kid off and make the return trip back through same parking lot. The whole process can not take more then 5-10 minutes, but instead of being able to leave a sleeping baby safe and warm in you car you now have one who one whose sleep cycle has been disrupted, who has been exposed to inclement weather and who has been needlessly subjected to the hazards of being walked across and back a chaotic parking lot.

Thereâ€™s a needless trend to criminalize an ever broadening range of normal human behavior and activity and I salute the author for doing her bit against it.

Lenore here again: I have heard about this at many a school and pre-k, with school administrators insisting — maybe even believing — that this is for safety’s sake (and threatening to turn parents in to the authorities, if they don’t comply). I love how this letter points out the reality versus the delusion: WHY is it safer to wake and drag a kid, than to leave and quickly return? It’s not. Drop the worst-first thinking and you realize that our society has been trained to see normal convenience as proof that a parent is negligent.Â 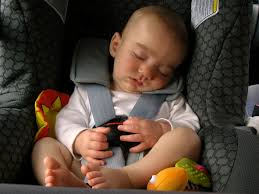 Wake up, baby! It’s time to schlep across the parking lot. And then — will you please fall right asleep again?

196 Responses to Why Are We Making Pre-K Drop-Off So Hard?