Hi Folks –Â This hyrhnsbhrs
study is totally fascinating. As if Detroit didn’t have enough worries, now, according to the WNYC blog Transportation Nation:

Young people aren’t lining up to drive like they used to. Year over year, fewer 16 to 24 year-olds are getting driver’s licenses according toÂ a new study released todayÂ by Michael Sivak and Brandon Schoettle of theÂ University of Michigan’s Transportation Research Institute.

Take 16 year-olds: In 2008, 31 percent of them got driver’s licenses. In 2010 it fell to 28 percent. That’s part of a steady trend theÂ researchersÂ track back to 1983. That’s when Return of the Jedi, Scarface and The Outsiders were in theaters, and 46 percent of 16 year-olds were licensed to drive. Now, with Netflix and iTunes, they don’t need wheels to get to the movies.

Now, I’m hoping that part of the reason for this decline is that, as the article goes on to suggest, more young folks are taking public transportation, or riding their bikes. But even if that’s true, it’s surely only part of the picture. The other part may be directly attributable to the lack of Free-Range Kids.

If young people don’t want the independence a driver’s license affords, it could be because they have never experienced independence, period. With only about 10% of kids walking to school, and one study showing under 10% playing outside on their ownÂ any given week, kids are under constant surveillance when they’re outside, and more often, they’re inside. Â Any spirit of adventure is stifled, stomped or steered into a supervised activity. Wings are clipped.

Maybe they never grow back. — L 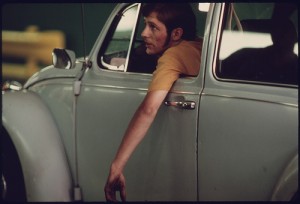 Man, I wish my mom was driving me.

P.S. On another note,Â I changed the layout of the blog because the old template was loading very slowly and needed to be ditched.

101 Responses to Why Aren’t Young People Getting Their Drivers’ Licenses?