January 5, 2017
These zsbyhkbrtn
musings come from a reader who blogs at southgeek and describes herself as “someone who sees and greatly fears that our personal freedoms and independence are being sold down the river in exchange for imaginary security. And when it comes to security of children, well, all bets are off.”
Â .
Agreed. But today she sent me a grumbling, discerning email about the way weather reports keep getting more and more hysterical, and that’s what I’m posting here:
Â .

Dear Free-Range Kids: Years ago when I moved to Alabama, I first saw meteorologists on the local TV stations breaking away from regular programming whenever there were tornado warnings in the viewing area.Â  I thought this was great at the time, and we now know that this has been a true lifesaver.
.

Over the years,however, as our tolerance for discomfort in society has grown, our “threshold level for warnings” has been inversely lowered.

As more and more information became available to us at our fingertips, our need to know more and more, in ever greater detail, Â increased.Â  It used to be enough to listen to the forecast in the morning and plan accordingly. Later on, thanks to cable, one could flip on the Weather Channel, at least when it actually was local weather 24/7, and…take note of any changing conditions.
Â .
Along with the internet came our ability to check the same radars that the meteorologists had access to…. Not a bad thing at all, Â but I have been observing some subtle changes.
Â .
During the weather segments without any threat of severe weather, they will now micro-analyze every speck of green on the radar. “This little shower here will approach the blah blah area and you can expect it to rain shortly.”
Â .
The weather has become one more thing with which to generate hysteria, and the media milks it for every click it can.
.
The weather app on my phone used to send out alerts only if there were tornado warnings in my area. Â Then I started getting alerts for severe thunderstorms approaching, which quickly devolved into merely being alerted for any thunderstorm, which then became any “rain event.”Â
.
I just this moment received an alert that reads: “Precipitation has been detected within your Radius of 5 miles.” Â Does this really require an urgent alert?
Â .
It’s actually pouring down pretty hard right now and I, to paraphrase Bob Dylan, “don’t need a weather app to know which way the wind blows.”
Â .

Less and less of a “problem” is more and more of an issue. I bet you can name immediate Free-Range parallels.
Â

Indeed, the Free-Range parallels are many. In the “olden days” we’d worry if our child wasn’t home by a certain time — usually dark. Now we Â worryÂ anytime a child is outside. In ye olden days, we’d let our kids wait in the car while we ran an errand. Now the worry is that even a five minute car-wait could prove fatal.
Â
Smaller and smaller blips loom larger and larger on other fronts, too: The worry that 1 millimeter of something or other in the blood is the same as an arsenic transfusion. The belief that eating a less than perfect meal ushers in a lifetime of illness. The inability to discern the difference between something that is 99% safe, like a drop-side crib, and a crib made of asbestos with a lead lollipop on a long string attached to the crib poles, which are spaced just wide enough to poke a head through.
Â
I’m not sure if the problem is that in times this safe we have to focus on something scary, so we boost the fear factor of everyday life. Or if it’s that we have been SO warned about SO MANY non-dangerous things (like “rain incidents”), we have lost the ability to make any kind of rational risk analysis.
Â
Either way, if you have some great ideas about how to recalibrate our doom radar, shout it from the rooftops!
Â
On second thought, please shout it from the living room, while sitting down. You know why. Â – L. 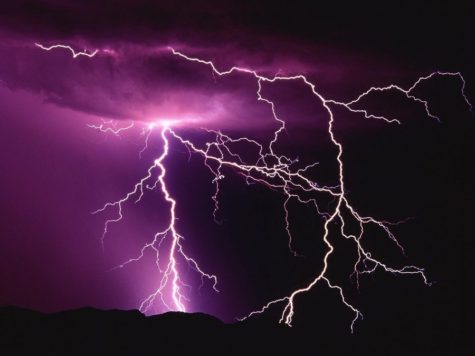 Tomorrow, scattered showers and/or The Apocalypse.

Twin, 2, Saves Brother After Dresser Falls On Him
“How I Got on the Sex Offender List” — By a Mom of Three

58 Responses to Why Is Every Rainy Day “The Storm of the Century” Now?