January 1, 2014
Readers — Wrap your head in a towel before you read this, so when you bang your head against  the wall it won’t hurt as much:

The [Wisconsin] State Journal will stop publishing birth announcements later this week because Madison’s two birthing hospitals will no longer provide the information to the newspaper.

The end of the traditional keepsake for parents and notice to the community stems from a growing concern about infant abductions, hospital officials say.

Birth listings “set people up as targets for somebody who might want to steal a baby,” said Kathy Kostrivas, Meriter Hospital’s assistant vice president for women’s health services.

...The National Center for Missing and Exploited Children tells parents to consider the risk of birth notices.

“In general, birth announcements in newspapers are not endorsed by most experts,” says a guide by the center, called, “What Parents Should Know.”

At least 290 babies have been abducted in the U.S. since 1983, including 132 at health care facilities, according to the center. Four cases, from 1989 to 1993, were linked by law enforcement to birth announcements, the center says.

“Our world is so different now than it was 25 to 30 years ago,” said Cathy Nahirny, the center’s senior analyst for infant abduction cases. Abductors “are using every means available to them to select a possible victim infant,” she said.

As one reader who sent in this story noted: “Reading the article it would appear that your new born would have a greater chance of being hit by lightening on the way home from the hospital, but I guess you never know and better safe than sorry eh?”

Yes, and what a perfect way to begin parenthood: Deeply terrified and convinced the world is worse than ever. (Despite the fact that  crime is down to the level it was when gas was 29 cents a gallon.) – L 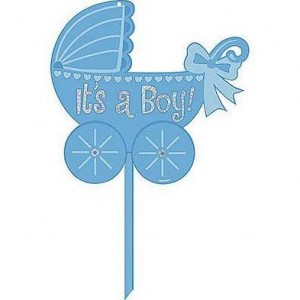 Come and get him!