Readers — I not only appreciated this letter one of you just sent, I found the Rosetta stone of parental worry in the article she links to!

Dear dtihzsybrn
Free-Range KidsÂ Do you let your kids have sleepovers?Â  Shame on you!Â  Yes itâ€™s time for the latest movement in overprotective idiocy, the Ban Sleepovers movement! Look:Â “7 Reasons to Say No to Sleepovers”

Oh my God what were our parents thinking, letting us have SLEEPOVERS!Â  We canâ€™t let our kids might be tired the next day!Â  They might not do well on all that ridiculous busywork from school.Â  Um I mean homework. (Yes, I’m being sarcastic. Insert evil grin.)

The sad part is I know families who really have banned sleepovers. – A.H.

Lenore here, who thinks she understands what’s REALLY going on, thanks to this quote I found in the No Sleepovers article:

Letting your kid spend the night away means giving up control of what she’s doing, eating and watching.

That, my friends, is the crux of the matter. We have gotten so used to total control of Â our children, that giving it up for even one night is too much for us to bear. Control each bite, activity and TV show we must. Otherwise, all bets are off. Our lovely child will turn to stone, or Go-gurt, or something else disgusting. We love our kids so much, yet we think they are nothing without us. – L. 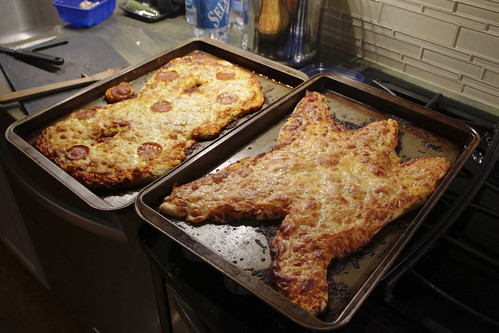 Why, kids on sleepovers might even make pizza! That has cholesterol, is fattening, and could conceivably lead to a life in the Mafia. (Photo by woodleywonderworks)

A Horrifying String of Abductions
7 Reasons to Say YES to Sleepovers!

190 Responses to You’d Let Your Kids Go on a SLEEPOVER?! Isn’t That Like a Death Wish?